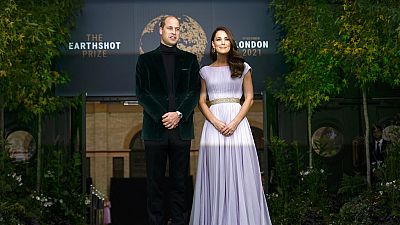 The city of Milan was handed an award for a pioneering scheme to combat food waste, at the inaugural ceremony of Prince William's Earthshot Prize.

The Italian city's food waste hubs project recovers food from supermarkets, restaurants and company canteens -- and distributes it to those in need.

The Earthshot programme is aimed at finding new ideas and technologies around the world to tackle climate change and Earth's most pressing challenges.

Celebrities including singer Ed Sheeran and naturalist Sir David Attenborough joined the British royal at Alexandra Palace in London for the ceremony on Sunday.

The winners included a land-based coral farm in the Bahamas to restore dying coral reefs, a green hydrogen technology developed to transform how homes and buildings are powered, and an India-based technology that creates fuel from agricultural waste in a bid to stop crop burning.

The government of Costa Rica was honoured for a project that pays local citizens to restore natural ecosystems.

Milan has enforced a city-wide food waste policy encompassing public agencies, food banks, charities, NGOs, universities and private businesses -- the first major city to do so, Earthshot says. Three food waste hubs each recover about 130 tonnes of food per year or 350 kg per day, the equivalent of an estimated 260,000 meals.

"Milan has created a blueprint that can be scaled throughout the world. If more follow Milan’s lead, cities may become one of our greatest assets in humanity’s progress toward a waste-free world," the programme adds.

It says a third of all food produced globally is wasted, using up precious resources and heaping pressure on agriculture. The global food system generates almost a third of the world’s total greenhouse gas emissions, and the waste comes as hundreds of millions suffer from food insecurity.

"I hope everyone watching understands more about the urgent challenges facing our planet in this decisive decade," said Prince William, the UK's Duke of Cambridge. "And I hope that Earthshot winners have shown you that there is no place for despair. You should feel inspired to act and to demand the solutions you've seen tonight get all the support they need."

The ceremony came less than two weeks ahead of the COP26 United Nations climate change summit in Glasgow, which begins on October 31.