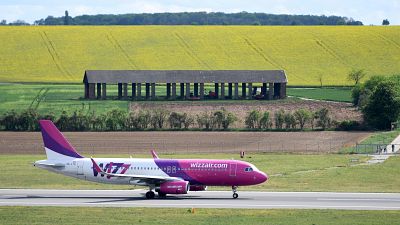 Speaking at industry conference World Routes, József Váradi did not mince his words when discussing the value of carbon offsetting, branding it “**greenwashing**”. He made similar remarks at an aviation industry event in New York a few weeks ago.

When asked by Euronews Green why Wizz Air continues to have a carbon offsetting scheme if this is his view, he turned to his Chief of Staff and said, “Do we?”

Having confirmed that the programme does indeed exist, Váradi went on to say that their carbon offsetting programme is not “going to change the world” and admitted it is not a strong enough measure. “Just imagine that you fly a crappy old aircraft, you pollute the world like hell, and then you [plant] two trees, and you think you are done?”

The airline has a website where passengers can calculate the carbon emissions from their flight and then pay to offset them. This money supports “verified carbon-reducing projects”. Wizz says that all fees go directly to the projects, except for admin and running costs.

Despite Wizz being Europe’s fastest growing low-cost airline, it supports just two projects: a tree planting programme in Uganda and a project in Ecuador which turns gases from landfill into electricity.

CHOOOSE say they ‘deliver a platform that enables both individuals and organisations to easily connect with the best CO2e reducing climate projects around the world.’

What are Wizz Air’s environmental credentials?

This, the company says, is thanks to the age of its planes - on average less than five years old, meaning they are more efficient than older aircraft. Plus they fly Airbus SE A321neo planes.

These have more seats and burn 25 per cent less fuel than more traditional planes.

Wizz also doesn’t have any flights under 500km meaning no short domestic flights.

Domestic flights were today branded a “climate disaster” by the Campaign for Better Transport who called for them to be banned. UK residents can sign a petition to support their campaign here.