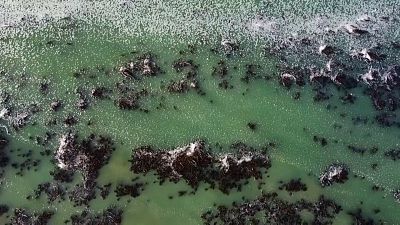 A drone shot of a kelp forest in California   -   Copyright  Vienna Saccomanno
By Ben Anthony Horton  with Reuters Connect  •  Updated: 11/10/2021

Kelp forests are one of California’s most precious coastal habitats.

For the third year in a row, Vienna Saccomanno and her team are using drones to survey kelp sites along the coast of Mendocino and Sonoma counties. They are mapping the carbon-absorbing brown seaweed so that the habitat can be protected and continue its role as a climate change mitigator.

So far, the results are promising.

"2019 was our first year of these surveys and we were basically surveying open water. There was just no kelp, literally, little to no kelp,” says Saccomanno, who leads the Nature Conservancy's kelp mapping program.

“And to be out here in 2021 and see this strong uptick in kelp is just so exciting as a scientist."

Since 2019, the Nature Conservancy has surveyed 36 sites each year for its program. The drones found an average kelp canopy size of less than 0.4 hectares per survey site in 2019.

That number increased to 2.2 hectares in 2020. This is still well below the historic average of 18 acres, Saccomanno says, citing data from the California Department of Fish and Wildlife. The numbers are not yet available for this year.

'In desperate need of help'

When healthy, the kelp forests provide a buffer against climate change by absorbing carbon dioxide from the atmosphere via photosynthesis.

The perfect storm of factors left the kelp ecosystem in desperate need of help, Saccomanno says. The kelp levels have risen since then, which she attributes to a recent upwelling of cool nutrient-rich waters that help the seaweed thrive.

But the canopies are still well below the historic average.

"We know that this ecosystem is still not fully in balance and there's still restoration work to be done," she adds.

The research her team is performing will allow scientists to monitor kelp levels more accurately. She also hopes to encourage the local community to aid the restoration of kelp forests through the removal of overabundant species, such as purple urchins, which are quickly devouring kelp forests along the Californian coastline.

“Once the urchin density is back in balance, that gives the kelp a chance to reset and restore.”