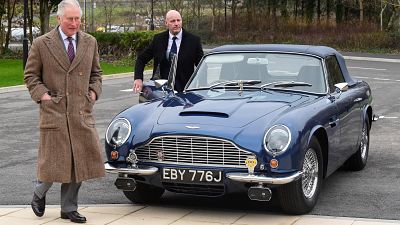 Prince Charles has revealed the secret recipe he uses to power his Aston Martin - and it’s rather delicious.

The British royal told the BBC in an exclusive interview that he converted his beloved car, which has been driving for over five decades, to run on wine and cheese.

The Aston Martin uses a fuel called E85, made from what he describes as “surplus English white wine and whey from the cheese process”.

E85 typically refers to a fuel blend of 85 per cent bioethanol and 15 per cent unleaded petrol.

Bioethanol, or simply ‘ethanol’, is a renewable energy source made by fermenting the sugar and starch components of plant byproducts. This would usually come from sugarcane and crops like grain, using yeast, but could also be made using the Prince’s wine and cheese combination.

Prince Charles is known for being outspoken when it comes to environmental protection. In 2020, he even ventured into sustainable fashion by collaborating with designers Vin + Omi to produce a clothing collection made out of nettles from his garden.

How to do a green conversion of a petrol car

If you don’t want to buy a brand new car designed to run on bioethanol, but you want to reduce the CO2 emissions of your petrol car, you can buy a device that converts it.

While conversion is a big initial investment, ethanol fuel costs significantly less to produce than fossil fuels like oil - so it should save you money in the long run. E85 can also help your engine to run cleaner and can even make it silent.

If you’re not keen on the ethanol route, you can also future proof your existing petrol car with an electric conversion kit.

EV conversion can be pricey if you’re converting a classic car or purpose vehicle, but it’s largely dependent on the weight. A 100km range is achievable for any conversion, but a longer distance can be reached with more batteries if your car has sufficient space.

Even classic cars are being converted in the UK. As each makeover is bespoke, it can take up to six months to convert a vintage car with prices starting at €29,326.

However, as fully electric cars are exempt from congestion fees or road tax in England, owners only need to pay for electricity. This means they could theoretically drive around the city of London from just £1 (€1.17) a week.