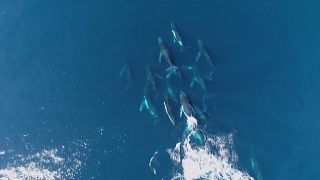 Drone footage has captured 15 male humpback whales following a single female in the waters off Australia's Queensland state in what scientists call a ‘heat run’.

"I was so excited I couldn't even sleep for that night after this happened," says Griffith University marine scientist, Dr. Olaf Meynecke, who has spent the last 12 years researching the behaviour and wellbeing of humpback whales.

Normally humpback whales are seen in smaller pods of two or three. But larger groups such as these can form during their mating period, which lasts between October and March.

"It's hard to say whether they are actually chasing the female or whether she's instigating the chase and the competition between the males," he adds. "It's a competition for the female to see which male is actually suitable to mate with."

In this case, the energy-intensive 'heat run' went on for at least three hours, and even attracted some dolphins.

These humpback whales will now return to Antarctica after summering in the warmer northern waters where they raise their young.