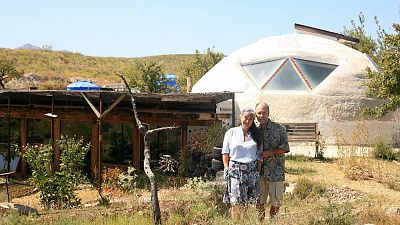 In the second episode of Euronews Green's new video series Low Impact Living, we revisited Laura Davies and Dave Buchanan of Earthship Spain to hear more about their journey and inspiration.

When Laura and Dave first moved to Spain in 2002, they started off in a cortijo - a traditional rural house typical in southern Spain. They renovated the space alongside builders, acquiring skills and experience that would come in handy when they turned their attention to their current home.

"We got to the point with our cortijo where we had to make the decision - are we going to keep on renovating it?" explains Laura.

"Then we decided that we were going to change the area that we were living in, so I started looking on the internet for architects who could maybe build us an eco-friendly home, suitable for the environment here - and I came across Earthships!"

At the time Earthships were a fairly unknown concept, mostly found in the US where the movement's creator Michael Reynolds is based.

Not wanting to travel to New Mexico to visit one, the pair decided to do it, but at their own pace, after initially buying the land in 2006.

"When we built, we didn't go for it wholeheartedly," says Dave, "we started building, but we didn't go full hog. We decided to spend one day a week on building the house, so that gave us plenty of time to do research, analyse, write blogs, and change our mind as often as we liked.

"Obviously it took us a long time to build over one day a week [about seven years], but it would have been about a year and a half if we'd done it five days a week.

"But that gave us a lot of chances to research the difference in the products and these materials that we have in Spain."

What is an Earthship?

Earthships have boomed in popularity over the last decade. They are designed around six essential human needs which can be addressed through an environmentally sustainable build.

Dave explains the water set-up their Earthship has, as an example of how intelligently constructed these buildings are.

"We collect water off the roof and it's stored in tanks," he says, "and the whole thing is designed so that everything runs by gravity, to avoid using electricity and pumps as much as possible."

This means that their shower is positioned higher in the Earthship than other parts of their house, so it gets the clean water first. Then the waste from the shower flows through to their indoor planter - which in turn harnesses the cleaning power of plants.

"At the front, we've got a planter which has all our plants in it, which we use to recycle our water," explains Dave. "You pass all the greywater through it, which is the water from your hand-washing, your kitchen sink, your bathroom sink, and your shower water - and that goes through the planters.

"It filters through the roots of the plants, and they clean the water - so it gets to the end, and you pump it out to flush the toilet. It's clean enough to flush with, you wouldn't go drinking it - but it's clean enough for the toilet. Then that goes outside to a septic tank area."

During the build, Laura and Dave calculated how much water they would need throughout the year - and then built an area to catch the rainwater on top of their house. This also meant taking into consideration how rare rainfall is in Almeria, where they now live.

This is just one example of how the pair live in harmony with nature, even using quartz rocks as part of their filtration system to clean the water they capture. Embracing the elements is a huge part of the Earthship movement, and is at the heart of every design.

"The name Earthship was coined by the architect, Michael Reynolds, as an idea of living on a house as you would live on a ship," says Dave, "so when it's rainy you do lots of rainy things. When it's calm you clean the boat, etc."

"He said it was 'sailing with the Earth,'" Laura adds, noting that in their Earthship they too feel totally immersed in nature.

Sharing their expertise and inspiring others

As the first Earthship to be built in Europe, the project was open to volunteers and visitors throughout the seven-year build process - allowing for other people to come along, help out, and learn about the design.

"We've had some really lovely people come," says Laura, "one couple has gone on to buy some land in Uruguay, and they're planning an Earthship built there. And we've had others as well, who've started up projects in Spain too."

While it's lovely for the pair to see similar builds inspired by their home, they also love when people are affected in smaller ways.

"Sometimes they've seen the bottle walls and they really like them," Laura explains, "so where they may have used a brick wall before for a little extension or a shower unit or something, they've tried the can and bottle walls."

It's this that both Laura and Dave feel is the biggest factor in living sustainably: using what you already have around you.

"Instead of throwing out that old cabinet, or the avocado bath suite that you really don't like, you can get creative and think of ways that you can make something into something that gives you beauty," Laura adds.

This has had an impact on Laura's own work too. As an artist, she has found that since working on the Earthship, her approach to her materials and process has completely transformed.

She now works with recycled materials, like teabags, to generate her pieces - which are all inspired by the nature around her.

Watch the video above to hear Laura and Dave talk more about their home and their motivations.