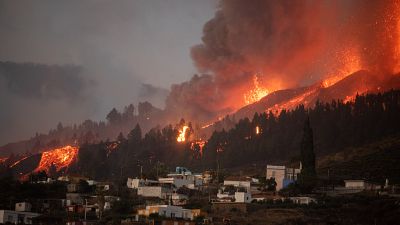 The release of the Intergovernmental Panel on Climate Change (IPCC) report back in August triggered global headlines about humanity’s impact on global heating.

But one campaign group is urging people to assess the language they use when talking about wildfires, flooding and other extreme weather events.

With the consequences of global warming are increasingly evident around the world, the campaign for #NoNaturalDisasters is out to challenge the terminology surrounding these phenomena.

The group claims there is no such thing as a natural disaster, giving the following explanation on its website.

“If we recognise and accept the standard definition of a disaster as a ‘serious disruption of the function of a community or a society at any scale due to hazardous events interacting with conditions of exposure, vulnerability and capacity’ then we must consider human involvement at the core.”

It goes on to argue that to say a disaster is ‘natural’ is wrong. What’s worse, it misleads people to think the devastating results are inevitable, out of our control and are simply part of a natural process.

We must consider human involvement at the core.

“To call a disaster ‘natural’ absolves powerful decision-makers of responsibility for allowing or forcing people to live in vulnerable conditions,” says Kevin Blanchard, founder of the #NoNaturalDisasters Twitter account.

“This use of ‘natural’ strips disaster stories of their social, political, environmental and economic context – one where injustice is pervasive.”

Alongside other organisations such as Shelterbox, UNDRR, and the International Federation of Red Cross, the group is advocating that we change our terminology as it shapes how we think about disasters.

There are no "natural" disasters. #WorldDisastersReportpic.twitter.com/ckWyzzKtyB

The climate crisis will only exacerbate an increased number of climate-based disasters.

“More storms, flooding, and wildfires will lead to greater numbers of people being affected, with those marginalised because of their economic status, sex, age, sexuality, religion etc being statistically more likely to be impacted,” says Blanchard.

Those marginalised because of their economic status, sex, age, sexuality, religion, are statistically more likely to be impacted.

We can all play a part in the prevention of disasters however. By reducing the number of people living in poverty, adequate government planning, and putting structures in place for rebuilding damaged areas, disasters may cause havoc, but they will be less climatic for communities. “Whilst hazards are inevitable, their impact shouldn't be,” says Blanchard.

“To build resilience specifically for climate shocks, we are factoring climate vulnerability into which households we target,” says Julie Kedroske of the BRAC Ultra-Poor Graduation Initiative (UPGI).

UPGI is a holistic intervention to empower people to escape extreme poverty through a two-year intervention that works at meeting basic needs. These include generating income, financially supporting individualism and empowering social development.

The UPGI understands that you can’t just help people out of poverty, you have to give them tools to stay out of poverty in the long term, by preparing them for the effects of climate change.

“In drought-prone regions of Kenya, people in extreme poverty are especially vulnerable to the effects of climate change as many rely on raising livestock,” says Kedroske. “Their livelihoods are threatened by worsening droughts, especially women and youth.”

To address their needs, the UPGI partners with local governments and organisations to strengthen resilience to climate shock.

“The programme encouraged participants to maintain multiple sources of income and to save for economic and climate shocks to minimise their risk of losing livelihoods,” Kedroske says.

“By the end of the programme, all participants had savings, with an average increase of $151 USD per participant. In addition, over 80 per cent of households had at least two income sources, creating further economic resilience against future shocks.”

Agnes opened a small shop and hotel in the centre of her town - income she can now depend on in case of further climate shock.

Agnes, one of the participants in the UPGI in Kenya says she once had nothing to smile about. She used to rely on casual labour jobs to support her and her seven children. With the skills and resources acquired from the programme however, Agnes opened a small shop and hotel in the centre of her town – two streams of income she can now depend on in case of further climate shock.

“If there is an emergency or drought, I know that my savings with the Village Saving and Loans Association will be able to cover any loss,” she told the UPGI. “Neighbours come to visit me, borrow things or money when they need it.”

“It is critical that international development actors incorporate a climate lens into everything they do,’ says Kedroske.

“We now need a global effort to eradicate extreme poverty - and factors that keep people trapped in poverty such as climate shocks - with even greater coordination at all levels, from multilateral organisations to local governments.”