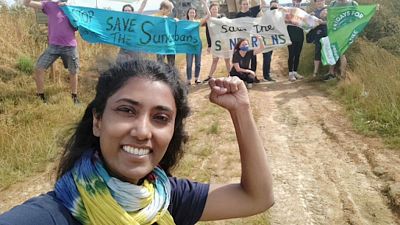 Tonny Nowshin takes part in the campaign to save the Sundarbans, at a protest near the Grazweiler coal mine, North Rhine-Westphalia ,Germany, July 2020   -   Copyright  Tonny Nowshin
By Ateeqa Riaz  •  Updated: 29/09/2021

MA student Ateeqa Riaz is studying Journalism at Falmouth University. In this piece, she discusses why those living in the Global South should be shaping climate policy.

Countries in the Global South may have the smallest carbon footprint but they already face extreme weather caused by global warming.

These communities should be at the heart of deciding how the world combats climate change, says economist Tonny Nowshin, but the rich nations of the Global North haven’t been listening. Nowshin is determined to change this.

She belongs to a new generation of activist academics who want to bring diverse voices into the climate conversation.

Black, Indigenous, and People of Colour (BIPOC) communities of the Global South have practical knowledge of climate change which can help shape policy.

Political leaders in the Global North have a moral obligation to listen Nowshin adds, it’s part of taking responsibility for their role in driving global warming.

It’s a deeply personal project for Nowshin, 33, a Berlin-based economist. Originally from Bangladesh, she fears for her native country as global warming swells the oceans.

"I read this one projection that by 2071 - in 50 years - there wouldn't be a country called Bangladesh because of the sea level rise,” she says.

“I was very upset, I was crying - I couldn't deal with it - for me, it was very emotional.”

World Bank climate data projections indicate temperatures are predicted to increase between 1.4°C and 2.4°C by 2050 and 2100.

A recent study from the Potsdam Institute for Climate Impact Research shows that the effects of global warming will push countries like Bangladesh into extreme poverty by 2030 if current climate change policies don’t change.

Privileged lifestyles in Europe, North America and other nations in the Global North produce a carbon footprint 100 times greater than that of the world’s poor nations combined, according to a recent OXFAM report.

This pattern of inequity carries over into efforts to combat climate change; the consumption habits of the richest 1 per cent of nations still exceeds the Paris Agreement targets 35 times over, says Oxfam.

Nowshin was raised by parents active in the guerrilla force fighting Pakistan during the 1971 independence war in Bangladesh.

Activism is second nature to her and in 2015-2016 she joined the protest movement against government plans to develop coal power plants in the Sundarbans, an area of unique biodiversity in Bangladesh’s coastal delta region.

In 2016 Nowshin took her activism into the academic space and started studying development economics at the Berlin University of Applied Science. Still a campaigner for climate justice, she devotes much of her energy to lobbying for policy change to mitigate the climate crisis.

I’m demanding we re-evaluate the way we make all the economic decisions, we need to shrink and give nature space.

For Nowshin, this means promoting a degrowth economic system that seeks to rebuild society in an ecologically sustainable way.

“We think our economy is something outside of nature, outside of the planet,“ says Nowshin.

“I’m demanding we re-evaluate the way we make all the economic decisions, we need to shrink and give nature space.”

She advocates reducing consumption to re-balance the global economy in a just, ecologically sustainable way. It’s a simple equation: degrowth replaces GDP as the indicator for economic health and human wellbeing.

Nowshin argues that to tackle the climate crisis, decolonisation is key.

With BIPOC voices included, she hopes for an end to, what she describes as, the 'white saviour' narrative, which sees rich nations ‘saving’ the Global South from climate change.

It’s a mindset that misses the point entirely, Nowshin says.

People in the Global South face the effects of global warming daily, seeing the land degrade and losing livelihoods to extreme drought and flooding.

“We cannot solve a problem with the same tools and same mindset that created the problem. We need to focus differently, rethink our economic system and prioritise the people who are in the forefront and listen to them,” she says.

The Global South has urgent problems which push climate goals into the background, says Kaveh Madani, an environmental scientist at Yale and Imperial College London.

Black scientists are trying to cope with the absence of resources, so Africans can live today.

“People are struggling to stay alive today in the middle of a war, tensions, pandemic, drought, famine. No one cares about climate change,” Madani explains.

When it comes to addressing climate change, countries in the Global North and South face different realities.

"White scientists sit in their ivory towers in the west and prescribe solutions for Africa, so people can be happy at the end of the century,” says Madani.

“Black scientists are trying to cope with the absence of resources, so Africans can live today.”

Madani reflects that figures like Greta Thunberg, whose activism inspires a climate movement with millions of supporters, are a long way from the real lives of Yemeni, Palestinian, or Afghan girls who simply want to stay alive or go to school.

Before a global dialogue on climate can start, says Nowshin, there has to be a change in moral tone. “It’s not about ‘I am saving you’, it’s actually about [saying] I’m responsible for setting your house on fire,” she argues.

In a radical proposal to redress the balance between North and South, Nowshin wants to see nations responsible for high emissions change their lifestyle by reducing meat consumption, flying and their addiction to fashion.

This may be an unrealistic goal, but Nowshin raises it to spark a fundamental shift in European academic discussions on how economics affect the climate.

The message is getting through though, as a change in language and tone in climate policy circles seems to indicate. In November this year over 190 leaders are set to meet for the COP26 summit in Glasgow, to agree on measures on tackling the climate crisis and actions to meet the Paris Agreement target of 1.5C.

This year’s COP26 presidency is held by the UK which says it’s committed to “championing diversity and inclusivity, amplifying the voices of those most affected by climate change, empowering the people behind the decision-makers, advocates and leaders.”

Oxfam spokesperson Jade Tenwick points out its delegations to major climate meetings are balanced in terms of diversity.

“We are integrating a gendered and racial lens in our policy work. Amplifying voices of people affected by climate change around the world is a core part of our communication and policy work on climate,” adds Tenwick.

But campaigners are aware that a change in language at the top has not yet filtered through to the ground or necessarily translated into action.

Nowshin wants to keep up the pressure on governments and fossil fuel companies and regularly joins protest actions against the continued use of coal-fired energy in Germany.

“When everybody is doing a tiny bit, then it's really possible. It's really about our existence and our responsibility” she says. “Climate change is coming for us and it’s going to impact all our lives”.