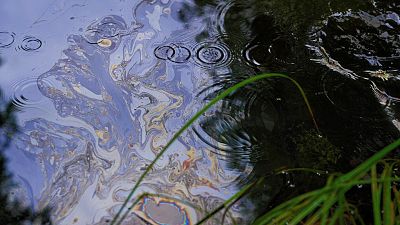 The Baltic Sea is one of the most polluted bodies of water on Earth. Nutrient runoff causes algal blooms, depleting oxygen and making water dark and murky. Urban litter and industrial chemicals that end up in the sea harm its ecosystems. Overfishing and climate change have also added their own long-term effects. Stocks of species like Baltic Cod have collapsed, disturbing the fishing industry across the region.

In Estonia, Mari Sepp manages the CleanEST project, which is co-funded by the EU's LIFE programme. It focuses on inland water bodies including rivers that bring all sorts of pollution to the sea. Sepp says that the positive news is that in the past 30 years, "nutrient pollution in the Baltic Sea has been reduced by roughly 50%." The main focus now has changed from nutrients to dangerous substances, marine litter, drug residues, shipping and alien species.

The river Purtse in Estonia is contaminated with toxic chemicals from old industrial sites. In Soviet times, there was a tyre repair factory just next to it. When the factory was operational, its grounds were drenched with industrial fuels. The CleanEST project has successfully removed 14,000 cubic meters of heavily contaminated soil, stopping the spread of pollution.

Olav Ojala, an adviser for the Estonian Ministry of the Environment's Water Department, explains that the oil didn't just stay in the soil, the substances kept spreading into people's drinking water, rivers and the sea. "Oil contains toxic and carcinogenic chemicals, and the more it remains in the soil the more these spread," he added.

All the contaminated bodies of water need to be mapped and cleaned to prevent further pollution of the Baltic Sea. The Erra River flows close to the Baltic coast in north-eastern Estonia. Its bottom is covered with petroleum pitch up to half a meter thick. It will be removed in the near future.

The smelly and sticky substance is a hazardous industrial residue. In Soviet times, the industry that mined and processed oil shale often dumped untreated waste into ditches and rivers. Today, layers of solidified bitumen still cover the riverbanks.

According to Raimo Jaaksoo, a project manager at the Estonian Ministry of the Environment's Water Department, their research has shown that there were approximately 40 000 cubic meters of this substance in the Erra River. He tells us that "it will be removed and deposited at a landfill for hazardous waste". According to him, it will no longer affect the environment there.

The Curonian Spit is a thin sand dune peninsula stretching between Lithuania and Russia. The fragile beauty of its protected nature is a powerful symbol of international conservation efforts in the Baltic region.

In September 2020, the European Union renewed its commitment to restore the health of the sea. A groundbreaking conference called 'Our Baltic' brought together government ministers, scientists, NGOs and industry stakeholders and was hosted by the European Commissioner for Environment, Oceans and Fisheries, Virginijus Sinkevičius. He tells us that he's very proud of the conference because it brought together not only environmental ministers but also other ministers responsible for things like agriculture and fisheries.

He explains that at 'Our Baltic' they signed a joint declaration and three weeks later, at a council in Luxembourg, they agreed on the total allowable catch (TACs) and quotas for the Baltic Sea region within the scientific limit.

We continue to implement our biodiversity strategy, our farm to fork strategy but we also have a number of very significant projects which tackle actual pollution sources around the Baltic Sea

Prevention vs clean up

The EU is attempting to remove pollutants. An example of this can be found in a large industrial shipyard in the city of Klaipeda, just across the lagoon from the Curonian Spit. It is part of another EU-funded project called "Fit for REACH". The shipyard is aiming to replace harmful chemical substances in its production processes with safer alternatives.

This, Jolita Kruopiene, a researcher in environmental engineering at the Kaunas University of Technology and Consultant for the Fit for REACH project, says is the right way to do things. "It is always better to concentrate on prevention instead of trying to cure problems when you have already caused those problems". "It's like win-win, it's good for the environment, for clients, for workers, and also good for companies at the same time", she adds.

The Vakarų metal plant produces components for ships. It has already reduced its emissions with underwater plasma cutting technology. Now, with the help of the "Fit for REACH" project, it's looking to eliminate a toxic compound from the spray that protects finished metal parts from rusting.

The director of the plant, Tautvydas Ratkevičius, says that their location close to the Curonian Lagoon reminds them "how important it is to keep the Baltic Sea healthy and clean". The Baltic Sea is what he calls their "beautiful heritage that needs to be preserved".

Pollution from agricultural fertilisers and urban wastewater can be minimised in many ways. Europe has developed more than one hundred different measures, and more innovative ideas keep emerging.

In Estonia, the ponds in the town of Rakvere became the site of an experiment to reduce water pollution. This experiment also offers new habitats for aquatic life and nesting sites for birds.

Vallo Kõrgmaa, a specialist from the CleanEST project, designed artificial platforms that help purify the water. He describes them as being bases where they put plants that usually grow by the shore. These plants are used to clean the water using a method that's called phytoremediation. It removes some of the contaminants from the water by helping the root system of plants to act as a natural filter.

From cleaning the rivers to protecting fish and restoring biodiversity, each step gets us just that little bit closer to a healthy and pure Baltic Sea.