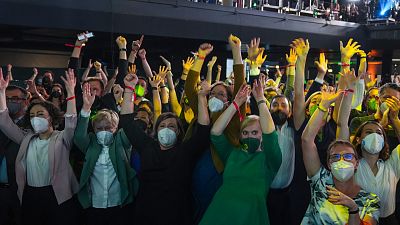 Members and supporters of the Green Party (Die Gruenen) gesture at the Green Party event after the close of polling stations.   -   Copyright  AP Photo
By Jonny Walfisz  •  Updated: 27/09/2021

The results are in for the 2021 German elections. It’s confirmed that a coalition government will be in power, but it’s uncertain which parties it will be made up of.

What is clear is that the state of the climate played a big part in how people voted.

Climate change has been a major concern in Germany this year after terrifying floods tore through regions near Belgium. As a result, there have been huge protests against the lack of climate action by the government. And it looks like the environmentally conscious Green Party have had their most successful election ever.

Some of the heaviest rainfall fell in the Rhineland-Palatinate, a state in the west of Germany, causing widespread damage, massive power outages and the deaths of at least 184 people, the highest number in all the affected countries.

Climate scientists from World Weather Attribution (WWA) concluded that climate change was a critical factor in the flooding. “We always think that it cannot happen here, but look at where we are now”, Karsten Haustein, a scientist and meteorologist at the Climate Service Centre Germany, told Euronews.

Climate change was top of the agenda

In the run-up to the election, climate change was confirmed to be the top issue for voters.

The leaders of the top parties were hyper-aware that they needed to show they were taking the flooding seriously. Green leader, Annalena Baerbock, chose not to visit the affected areas as she didn’t want to turn the tragedy into a political opportunity.

The other two major party leaders did show up, with mixed results. Olaf Scholz, leader of the Social Democrats, came off better than Armin Laschet, leader of the Christian Democratic Union, who was photographed laughing during a tribute to the flood’s victims.

The Green Party recognised the flooding was a pivotal moment. It wasn't the first time they've seen a surge of support following a treacherous climate event.

After 2018’s heatwaves, the Green Party won 20 per cent of the votes in the 2019 European Parliament elections.

With the floods still in recent memory, it was no surprise that come this election weekend, the public wanted to know how the next government would care for the climate.

Greta Thunberg joined climate activists protesting outside the Bundestag on Friday. Across Germany, 472 climate protests were planned ahead of the election weekend.

Greenpeace Germany has criticised the government’s plans, stating that the current German plan is not even compatible with the goals set out in the Paris agreement to limit global warming to 1.5 degrees Celsius. So they wanted to make sure things would change, post-election.

"It’s about sending a strong message to the future government that we expect ambitious climate politics and it’s also about motivating people who are still uncertain who to vote for," Lisa Göldner, a climate and energy campaigner for Greenpeace Germany, told Euronews.

How the election went in favour of the Greens

As the results of Sunday’s election roll in, it’s clear that the German people have spoken in favour of a more climate-conscious government.

The German Green Party is one of Europe’s most successful. They have already had a significant spell in government during the two terms between 1998 and 2005.

This is the best the Green Party has ever done in the Bundestag, Germany’s parliament, with 14.8 per cent of the vote. But even with these big successes, the Green party are a bit disappointed with their performance.

"We had hoped for more, but it's still a good election result and it gives us a lot of opportunities to be part of the new German government," Greens MEP Rasmus Andresen told Euronews from an election event in Kiel, Germany.

"For us, it's clear that we will just enter into the coalition if a new government would be a climate government. This is what we campaigned for and what our voters are expecting," said Andresen.

While the Greens may have hoped for a bit more at the polls, it’s still a historic result for them. And that’s down to the importance of climate change as an election issue.

Tellingly, the Green Party did well in the Rhineland-Palatinate area, where the terrible flooding took place. During the last elections in 2016, the Green Party came fifth with only 5.3 per cent of the votes.

But this year the Greens smashed that last result, coming third in the region with a four point vote gain.

With more of the German public mobilised than ever before around the climate crisis, the Green Party are in the perfect place to ensure the next government prioritises the climate.