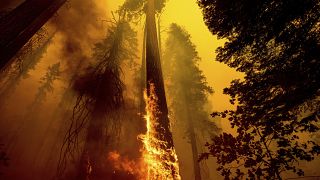 Wildfires have reached a grove of sequoias in California, US threatening some of the oldest trees on the planet.

Officials warned that hot, dry weather and stronger winds were contributing to “critical fire conditions” on the western side of Sequoia National Park in the Sierra Nevada. Two lightning-sparked blazes merged in the area.

The flames reached Long Meadow Grove, home of the Trail of 100 Giant Sequoias, a national monument last week. They were about 1.5 kilometres from the famous Giant Forest, a grove of some 2,000 massive sequoias.

The fires forced the evacuation of the park last week, along with parts of Three Rivers, a foothill town of about 2,500 people. Park crews have been preparing the Giant Forest by removing fire fuel and wrapping the trees in a fire-resistant material.

The National Park Service said on Friday that fire had reached the westernmost tip of the Giant Forest, where it scorched a grouping of sequoias known as the “Four Guardsmen” that mark the entrance to the grove. Since then cool weather has allowed crews to keep the flames from encroaching further into the area.

A fire in the region last year killed thousands of sequoias

Giant sequoias are specially adapted to deal with fire. It can even help them thrive by releasing seeds from their cones and creating clearings that allow young sequoias to grow.

But the extraordinary intensity of fires - fueled by climate change - could overwhelm these ancient trees. A historic drought is also making wildfires harder to fight.

Scientists say climate change has made the West much warmer and drier in the past 30 years and will continue to make weather more extreme and wildfires more frequent and destructive.

Watch firefighters battle to protect these ancient trees in the video above.