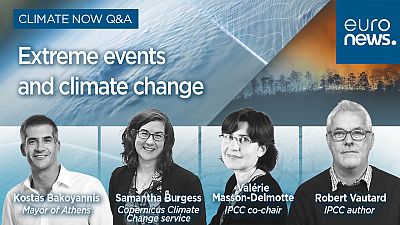 "The light that we see at the end of the tunnel is a train that is coming to drive all over us. So we need to make the necessary decisions," Mayor of Athens Kostas Bakoyannis told Euronews on Tuesday, September 20 at an interactive debate on climate change and weather extremes.

The panel of leading climate scientists and policy-makers conveyed a message of cautious optimism, saying it was still up to us to change course after a summer of extreme weather in Europe and elsewhere underscored the worsening impacts of climate change on our communities.

This important conversation took place just a few weeks after the Intergovernmental Panel on Climate Change (IPCC) warned time was running out to avert the worst effects of climate change, and ahead of crucial UN climate talks in Glasgow known as COP26.

Watch the highlights of the debate in the player below.

Science now provides us with a greater understanding of the specific impacts of human-induced climate change on weather. We know for instance that global warming increased the likelihood of the floods that claimed more than 200 lives in Germany and Belgium in July by up to nine times, a study by the World Weather Attribution (WWA) scientific consortium has shown.

The European Union’s climate monitoring service Copernicus said average temperatures across the continent this summer were the warmest on record at almost 1 degree Celsius higher than the 1991-2020 average.

"What we are witnessing are new records beaten by far," said Robert Vautard, IPCC author and Director of Institut Pierre-Simon Laplace, citing the new European temperature record of 48.8C reported in Sicily last August and the 50C registered in British Columbia. "Usually, records are beaten by one or two degrees maybe, or half a degree, but not five. So this is very worrying," Vautard told the panel.

What we are witnessing are new records beaten by far

He pointed to the IPCC report last month warning that such extreme weather events were poised to become even more common in the future as the planet continues to warm.

"In case emissions stay still, then we will go to two degrees [of warming] by 2050, basically. And in that case, we are pretty confident that extremes will change and more extremes will occur in every single region of the world. So it's not just Europe, it's everywhere and for many types of extremes and many types of other changes," he said.

According to Masson-Delmotte, even warming by tenths of a degree can have "irreversible long-lasting consequences, for instance, sea-level rise that matters so much for coastal regions in Europe and around the world."

"The climate impacts are different depending on where you are in the world and the scientific evidence of how the climate will change in the future is also different," said Samantha Burgess, Deputy Director of the Copernicus Climate Change Service.

What can we do about it?

On an individual level, the panel said a first step was for everyone to gain an understanding of the risks to their local community.

The scientist said the IPCC's atlas offered an interactive way to do so, looking at different warming levels in specific locations depending on various emission scenarios.

"All the commitments that were undertaken, that stem from the Paris Accords and including the European union ambitious goals, the 'Fit for 55' package, are not sufficient to meet the criteria of global warming as we speak," he said.

Under the 2015 Paris climate agreement, world leaders committed to trying to limit warming to 1.5 degrees Celsius since the late 19th century because problems mount quickly after that.

The 'Fit for 55' package unveiled by the European Commission this summer strives to reduce planet-warming emissions 55 per cent by 2030, from 1990 levels. It still faces months of negotiations between the 27 EU countries and the European Parliament.

The mayor of Athens emphasised that while climate change was a "global challenge", it required responses at the local level.

It's not just about the nation-states. It's about the cities and local authorities. We are the catalyst in this process.

"70% of CO2 emissions around the world actually come from cities. And that's despite the fact that cities only cover 3% of the world's surface," he noted.

He gave examples of recent policies implemented by his city, Athens, as Greece faced its worst heatwave in about three decades this summer, fueling devastating wildfires.

"We moved forward with appointing the first chief heat officer in Europe. It's not just a symbolic gesture, because it also enables us to bring about tangible results," Bakoyannis said.

"Politics can be either about fear or about hope. So we cannot just beat people into submission. We cannot just wave the finger. We have to actually create a sense of a forward-looking future, which in the case of Athens and most urban centres involves fair, equitable, sustainable, resilient cities and communities," the mayor went on.

Burgess highlighted the importance of dialogue between policy-makers and scientists in preparing for weather-related disasters.

We're almost in a fortunate position at the moment in that we have the latest scientific assessment available and we have a political process that is coinciding with that.

Looking ahead to the COP26 that is due to start at the end of next month, Burgess said: "We're almost in a fortunate position at the moment in that we have the latest scientific assessment available and we have a political process that is coinciding with that. So we have the ability to see ambitious action."

"My message would be to listen to science and please put the brakes and stop the train," Vautard concluded.