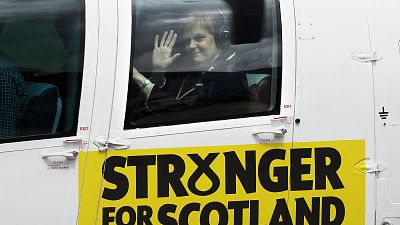 All Scottish flights will soon become carbon neutral, according to the chief executive at Edinburgh airport, Gordon Dewar. But there are still significant questions as to the effectiveness of these carbon offsetting schemes.

The Scottish capital’s airport already went carbon neutral earlier this year, and now management has set its eyes on a carbon offsetting scheme for every flight leaving the country.

Dewar’s plan is to offset the carbon impact of flights through funding solar power for schools or hospitals, heat pumps or insulation for council housing and by decarbonising research by Scottish universities and businesses.

He estimates that the cost of the scheme will be under £5 (€5.84) per passenger for an inter-European flight.

In June, Loganair, a Glasgow-based airline, became the first carrier to introduce a mandatory carbon offset levy for £1 (€1.17) on each flight.

It’s part of Loganair’s ‘GreenSkies’ initiative. The airline also aims to make some of its aircraft completely electric or hydrogen-powered in just three years. Trials for flights between Glasgow and Orkney are due to start this year.

While the technology may be some way off for long-haul flights, Loganair is confident it will be able to convert its smaller aircrafts for the hour-long, domestic flight by 2023 or 2024.

“The entire transport industry has a huge task ahead to address and reduce emissions from every form of travel, and it’s our responsibility as the UK’s largest regional airline to lead the way,” says Loganair chief executive Jonathan Hinkles.

Glasgow airport’s announcement coincides with the beginning of Scotland’s Climate Week and the build-up to 26th UN Climate Change Conference of the Parties (COP26) in Glasgow in six weeks.

Get involved in taking climate action.

As Scotland was the first nation to declare a global climate emergency in April 2019, the country is now making significant moves to reduce its carbon footprint. Most notable is the goal to be ‘Net Zero’ by 2045.

But just how meaningful an action is a carbon offsetting scheme for one of the world’s biggest polluters - flights?

While carbon offsetting is still a great regeneration tool, the schemes can often fail to meet the standards hoped for by climate activists.

Projects that promise to plant trees to counteract the CO2 in our atmosphere are long-term solutions and unlikely to meaningfully mitigate climate change.

Projects that promise to plant trees to counteract the CO2 in our atmosphere are long-term solutions and unlikely to meaningfully mitigate climate change at a rate consistent with key thresholds. While a new forest may sequester a valuable amount of CO2 in the next 50 years, it won’t help us meet the Paris Agreement’s carbon neutrality goal in under eight years.

There are also question marks over just how committed governments are to carbon offsetting, with reports of new forest projects being uprooted to make way for cattle grazing, and soy and palm oil production.

It should be carbon removal, not offsetting

To reverse the climate emergency, we need carbon removal, not offsetting, a new report states.

Last month, the Climate Crisis Advisory Group (CCAG) released its report, “The Final Warning Bell”. It follows the IPCC report that climate change is a “code red” for humanity and states that, “Reducing greenhouse gas emissions is critical to our survival and must be undertaken at a pace and scale more ambitious than ever considered or achieved.”

The CCAG report goes on to state that even if we are successful in reaching net zero CO2 emissions by mid-century, we are still going to have atmospheric CO2 levels far beyond what is sustainable for the planet.

Therefore it is crucial that we “must also rapidly start removing greenhouse gases from the atmosphere at scale and start repairing our critically damaged climate systems.”

So while it is definitely a good thing that Edinburgh airport has announced plans to tackle its carbon footprint, it will take more than a small levy on all flights to actually offset their environmental impact.