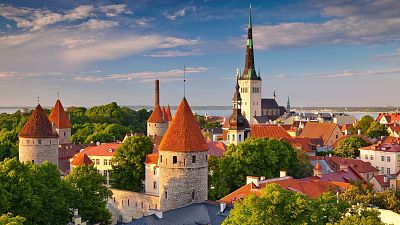 The Estonian capital of Tallinn has been crowned the European Green Capital for 2023.

Last night, the highly anticipated environmental prize was presented in the Finnish city of Lahti, the respective winner in 2021. Tallinn beat competition from Krakow, Poland; Sofia, Bulgaria and Helsingborg, Sweden to be recognised as a pioneer in sustainability across the continent.

After applying to the awards twice already and just missing the top spot each time, the Estonian capital reached the end of its long, hard-fought journey. The city follows in the footsteps of previous green winners including Stockholm, Hamburg, Oslo, and Lisbon.

Tallinn’s mayor Mihhail Kõlvart, took to the stage at the grand Sibelius Hall in Lahti to accept the award with a sense of humour. Tucking away his speech in favour of an improvised version, he said, “We may not look happy, but that’s how we are in Estonia,” describing his culture as typically “not very emotional”.

His team waved the Estonian flag as applause rang out in the auditorium and the city was presented with a cheque for €600,000.

At the same ceremony, the European Green Leaf Awards were also presented – a sister award for smaller cities of under 100,000 people. This year the city candidates were Bistrița, Romania; Elsinore, Denmark; Gavà, Spain; Treviso, Italy; Valongo, Portugal and Winterswijk, The Netherlands.

Two cities were deemed to be winners, Valongo and Winterswijk, who received prize money of €200,000 each and both made heartfelt speeches. For many attending, the achievement of being crowned green capital was not only a chance to win a lucrative investment, but evidently a boost for local pride too.

Composed by Cecilia Damström and conducted by Dalia Stasevska, the piece was a haunting, 10-minute portrayal of the imminent collapse of ecosystems.

The awards were also attended by Finland’s prime minister, Sanna Marin, who spoke to the competitors via a video call.

“Science tells us that we need to become climate neutral by the mid-century, it is a scientific fact,” she began.

“The European Green Capital initiative is an excellent way to emphasise the role of cities in fighting climate change.”

One thing is clear, climate targets must be reached together.”

She stressed that awards like these are another step along the way to Europe becoming the first climate neutral continent by 2050, meaning that our continent will not emit more greenhouse gases than it can sequester.

She added, “We have to move fast forward - one thing is clear, climate targets must be reached together.”

What does it take to become a European Green Capital?

The European Commission initiative rewards cities who have committed to environmental, social and economic sustainability. It’s about making genuine process in the fight against climate change so that urban spaces can become “more resilient”, according to awards presenter and EU Commissioner for the Environment, Oceans and Fisheries Virginijus Sinkevičius.

But the winners of the awards are also those who can inspire others with their sustainable solutions, spreading the idea that green cities are liveable and enjoyable.

“It's not seen as something I have to sacrifice - I do it because it's fun and it's cool,” said Lykke Leonardsen, head of Copenhagen's climate unit, when the city won the same award in 2014.

A city’s performance in the past and present all contribute to the award evaluation process.

A jury of experts assess applications in accordance with 12 key environmental indicators:

6. Sustainable land use and soil

After a shortlist has been chosen, the final cities are judged on their overall commitment, vision and enthusiasm - as well as their ability to be a role model to the rest of the world.

Why did Tallinn win the award?

It is the first time Tallinn has won the “European Green Capital” title and the city has been praised for its dedication in re-applying year after year.

As the largest city of Estonia, it has a population of 393,222 and is located on the coast of the Gulf of Finland in the Baltic Sea. Ever since the country received independence in 1991, following the Soviet era, the capital of Tallinn has advanced hugely in areas of sustainable development – no longer constrained by the previously restrictive regime.

The Old Town of Tallinn has earned recognition as a UNESCO World Heritage site due to its medieval architecture and its park network has also grown in size with 90 m2 of public green areas. These protected areas make up 19.5 per cent of the city.

After a history of heavy, polluting industry, today Tallinn has come a long way. The city has a long-term strategy called ‘Tallinn 2030’, which has the overall objective to build a “healthy city environment and sustainable use of natural resources” by the year 2030. This strategy is supported by the Tallinn Landscaping Action Plan, the Rainwater Strategy, and a Sustainable Energy Action Plan which includes strict efficiency requirements for buildings.

Tallinn’s climate-neutral roadmap promises a 40% reduction in emissions by 2030.

When the jury sat down at the European Green City Awards, they pointed out that elements like free public transport had contributed to the win, among other factors such as a vision to deliver climate action that support the UN Sustainable Development Goals. Tallinn’s climate-neutral roadmap promises a 40 per cent reduction in emissions by 2030.

"We are firmly committed to a green future, but we will only achieve it if we can make changes in different areas at the same time and in synergy,” said Tallinn Mayor Mihhail Kõlvart in a statement.

“The time has passed when the protection of nature and the progress of people are opposites – we have learned to associate innovation and development with a sustainable economy and green thinking."

Tallinn is inviting, comfortable, and clean – a city of the future.

“For us, a green capital means that Tallinn is inviting, comfortable, and clean – a city of the future,” Kõlvart said proudly at the ceremony.