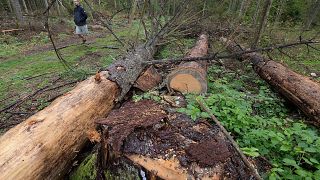 At least a third of tree species worldwide are at risk of extinction, a new landmark report warns.

"That means there are twice the number of threatened tree species globally than threatened mammals, birds, amphibians and reptiles combined," said the Botanic Gardens Conservation International (BGCI), which published the State of the World's Trees report.

Over 440 tree species are right on the brink of extinction with fewer than 50 individuals remaining in the wild. This includes the Menai whitebeam, found only in North Wales, which has only 30 wild trees remaining. At least 142 species are recorded as extinct in the wild.

According to the report, which was compiled by more than 60 institutional partners such as botanic gardens, forestry institutions and universities as well as over 500 experts - 58 per cent of native European trees are threatened with extinction.

Whitebeams and Rowan are the most threatened trees in the region.

However, the country with the single largest number of threatened tree species is Brazil. The Latin American nation counts 8,847 tree species - the highest number in the world - but about a fifth (1,788) are threatened.

Island tree species are more proportionally at risk, the report found. "This is particularly concerning because many islands have species of trees that can be found nowhere else," the BGCI notes.

Indonesia and Malaysia are both among the top 5 biodiverse countries in the world with 5,716 and 5,422 tree species respectively. Nearly 25 per cent of these are threatened.

What's the relation between agriculture and climate change?

The main threat to trees is agriculture with trees cleared for crop production, which impacts 29% of tree species. It is followed by logging for timber (27 per cent), livestock farming (14 per cent), urbanisation and fire (both 13 per cent).

The report flags that climate change is a growing threat. Change in temperature and weather patterns means many trees risk losing areas for suitable habitat. At least 180 tree species are directly threatened by sea-level rise and severe weather events.

Pests and diseases affecting trees are also impacted by climate change, which alters their survival opportunities in new environments.

The emerald ash borer - a wood-boring beetle - is native to East Asia but has caused major devastation in the US and now Russia and Eastern Europe. An invasive fungus that also first originated in Asia and which causes Ash Diebark, a chronic disease of ash trees that eventually leads to the tree's death, was first detected in Poland and Lithuania in the 1990s. It has since spread to most European countries.

The loss of trees is of particular concern as forests play a major role in the world's ecosystem. They account for 50 per cent of global terrestrial carbon and are home to 75 per cent of the world's accessible freshwater.

They also provide habitat and food for millions of other species including animals, plants and microorganisms.

'A wake-up call to everyone'

Still, there is "hope for the future", the BGCI said, noting that conservation efforts are growing worldwide. At least 64 per cent of all tree species can be found in at least one protected area and about 30 per cent can be found in botanic gardens, seed banks, or other collections.

Paul Smith, Secretary-General of the BGCI, described the report as "a wake-up call to everyone around the world that trees need help."

Sara Oldfield, co-chair of the Global Tree Specialist Group stressed that "each tree species has a unique ecological role to play."

"With 30 per cent of the world's tree species threatened with extinction we need to urgently scale up conservation action," she added.

It also calls for an expansion of tree planting schemes, particularly targeting planting of threatened and native species.

"Through reforestation efforts there is a huge opportunity to change this dire picture, but tree planting practices need to change to tackle threatened species specifically," Jean-Christophe Vie, Director General of the Fondation Franlinia, said.