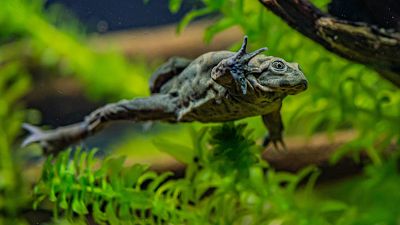 Endangered ‘scrotum’ frogs have just gone on display at a British conservation zoo for the first time as part of an effort to save the species from extinction.

Lake Titicaca frogs are officially named after the lake on the border between Peru and Bolivia where they can be found. These aquatic frogs spend most of their lives deep underwater using the saggy folds of skin that earn them their unfortunate nickname to absorb oxygen.

“This species is unique. It is only found in Lake Titicaca and the surrounding areas where it is adapted to the very adverse conditions there,” says Roberto Elias Piperis, coordinator of the wildlife laboratory at the Cayetano Heredia University in Peru.

“The lake is at extremely high altitude, nearly four times as high as the summit of Mount Snowdon in Wales and, in addition to its ecological importance, there is also a cultural one because the local inhabitants consider the frogs as a connection between them and the gods.”

A combination of pollution, habitat loss and hunting have devastated the frog’s wild population. The IUCN lists the species as endangered with an estimated 50 to 80 per cent of its population lost in the last 20 years.

“The one, high montane lake that they live in is an extremely fragile environment and they have really suffered at the hands of pollution and introduced fish species.

He adds that, though it is illegal, Peruvian and Bolivian locals still harvest these frogs and use them in smoothies that are believed to enhance virility and energy.

An important alliance to save the frogs

Twenty of these rare amphibians are now being cared for at Chester Zoo where experts are studying them to gain conservation insights.

“What we need to do now is to build on our knowledge of the species and its biology – by learning all about their life cycle, mating behaviours, favoured habitat and ability to tolerate or resist a deadly fungus that is wiping out lots of amphibians, called chytrid,” explains Dr Garcia.

They are hoping to establish a European population by sending 130 Lake Titicaca frogs to 13 different leading institutions across the continent.

The Zoo has also formed an alliance with Cayetano Heredia University in Peru and the Natural History Museum’s Alcide d’Orbigny in Bolivia. It is the first time the two countries have come together in an attempt to protect the frogs.

Teresa Camacho Badani heads up the herpetology department at the museum in Bolivia and is also in charge of the K’ayra Centre where around 200 of these frogs live as part of a breeding programme.

“Work has been ongoing for several years in both Bolivia and Peru to conserve the Titicaca water frog,” she says.

“This was taking place in each country independently and the two countries joining up their efforts had not been possible until now.”

With the new alliance and the ambassador frogs on display at Chester Zoo, Camacho Badani believes there has never been a better moment to save this species from extinction.