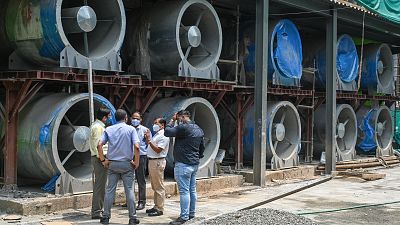 A 25-metre “smog tower” has been constructed in New Delhi in an attempt to improve the city’s air quality.

Located in Connaught Place, a busy shopping and finance hub in the centre of the city, the tower is made up of 40 giant fans. These fans pump 1,000 cubic metres of air per second through filters with the aim of halving the amount of PM 2.5 particles within a 1km radius of the tower.

Why does New Delhi need a smog tower?

In 2020, the World Air Quality Report found that New Delhi was the most polluted capital in the world for the third year in a row. The concentration of PM 2.5 particles is regularly more than 20 times more than safe limits with thousands of deaths every year thought to be linked to poor air quality.

These microscopic particles are dangerous because they can get deep into our lungs, irritating and damaging our respiratory systems. They have been linked to health effects such as asthma, lung cancer and heart disease.

“In the war against pollution, the country’s first smog tower has been established in Delhi,” said Chief Minister of Delhi Arvind Kejriwal in a Twitter post.

“If the results of this pilot project are good, then more such smog towers will be installed all over Delhi.”

Are smog towers the answer to New Delhi’s pollution problem?

Scientists at IIT Bombay and IIT Delhi will be assessing what impact the tower actually has on pollution in the area as part of a two-year study. This information will help the city to decide if building more smog towers will help improve air quality.

Experts at the University of Minnesota who designed the technology say that it could “curb the PM 2.5 concentration by about 50 per cent, giving relief to residents and saving several hundred thousand lives” - if New Delhi builds 100 towers in the next few years.

Constructing the tower cost $2 million (€1.7m) and installing enough to clean the city’s air would come at a high price. It is money that critics argue could be better spent preventing pollution, but the scientists say they were never meant to be a permanent answer to New Delhi’s problem.

"Installing smog towers has never been, and will never be a solution," Sunil Dahiya, an analyst with the Centre for Research on Energy and Clean Air, told AFP.

"If we really, really want to address pollution, it has to be addressed at the source.”