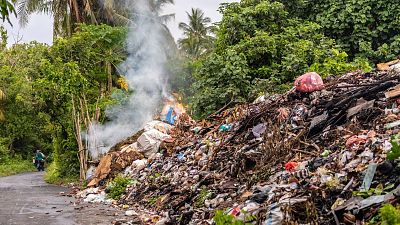 Though climate change is exacerbating wildfires, there are still things we can do to help prevent them in our own countries.   -   Copyright  Canva   -
By Jutalla Coulibaly-Willis  •  Updated: 23/08/2021

As wildfires across the globe become more frequent and more deadly, it’s more necessary than ever to know how to prevent them.

July was the world’s hottest month on record, with flames devastating large parts of the US, Canada, Turkey, and Greece. As wildfire incidents rise, fire departments across the globe have been publishing their advice for those visiting fire-prone areas.

In the US, around 90 per cent of wildfires are caused by people, here are some top tips to avoid accidentally starting a wildfire:

Keep your vehicles away from dry grass

A car’s exhaust pipe can reach scorching temperatures of up to 600℃. If you’re out driving, stick to the road to avoid setting dry areas alight.

Equally, poor car maintenance in the height of summer can also pose the risk of sparks or fuel leaks, potentially enabling the start and spread of wildfires.

We all love a marshmallow by the fire, but not when there’s significant risk involved. Cooking on camping stoves, although a little less rustic, means there is less risk of losing control of open flames.

However, if you do choose to keep it traditional and opt for a fire, place rocks around the edge to avoid it spreading, and burn all wood to ash before you leave, being extra careful to check there are no embers left.

Dispose of cigarettes and other lit items safely

We’ve all seen a movie protagonist unintentionally start a fire using a lit cigarette, but this risk is very much a reality.

Use an ashtray and make sure you keep lighters and matches in a safe place. Romantic candlelit dinners in the great outdoors may seem like a good idea, but be sure to keep an eye on where you place open flames.

Celebrating? Try confetti or disco lights instead of fireworks. Even a handheld sparkler can reach temperatures of up to 2000℃, posing serious risk of igniting surrounding dry areas.

Last year a major set of wildfires near Los Angeles, California were caused by a “smoke-generating pyrotechnic device” used as part of a gender reveal party.

The majority of firework-related wildfires occur around national celebrations like the 4th of July in the US, or New Year’s Eve. If you do choose to set off fireworks make sure you secure the area, avoid dry grass, and watch carefully for the spread of lit debris.

Picking up our trash should be an unconscious decision for most of us these days, but there will always be a few who didn’t get the memo.

A number of fire safety departments across the globe warn against leaving glass bottles behind in fire-prone areas, actively encouraging visitors to pick them up if spotted. This is because glass, in particular curved glass, can cause extreme heat when reflecting the sun, causing nearby dry patches of grass or shrubbery to catch light.

While scientists are largely in agreement that the extreme heat sweeping many parts of the globe is to blame for the increased likelihood and ferocity of wildfires, individual fire safety practices can play a huge role in preventing them.

As global warming ensures temperatures across the world continue to rise, even those in less fire-prone areas run the risk of being impacted. As this year’s fires have already demonstrated, wildfires are encroaching even closer to residential areas, spreading further than ever before, and taking more lives.