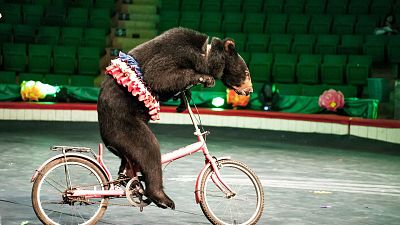 The last four bears from Hanoi Central Circus have now exchanged their muzzles for hammocks in the 'Animals Asia sanctuary' in Vietnam. The move comes after the circus decided to give up bear performance for good.

"They are the four Spice Girls. Just a little bit hairier," says the director of the Vietnam Bear Rescue Centre, Heidi Quine. The names became a sort of tradition, explains Quine, after the NGO rescued two cubs from the same circus and named them Sugar and Spice.

Animals Asia has two sanctuaries, one in Tam Dao, Vietnam, where 189 bears have already started afresh. The newcomers arrived in the middle of June and are gradually learning to live with their freedom.

"All they've really known after being taken from their mother in the wild is that manic, crazy, completely unnatural energy in the circus, it was all that they knew," says Quine.

Hanoi Central Circus was obliged to give up its last performing bears after a report from Animals Asia gave an insight into the psychological and physical distress the animals suffer in the circus.

Following the report, the Vietnamese Ministry of Culture sent out a directive that all facilities should phase out the use of wild animals.

The NGO's report, released in 2017, alleged that 16 facilities in the country were forcing hundreds of wild animals – including endangered species – to perform humiliating tricks at zoos and circuses across Vietnam.

The animals are kept in poor conditions by night, while they are forced to perform unnatural tricks during the day. Another concern the report highlights is that macaques, elephants, gibbons and bears are mostly undocumented, and could come from illegal wildlife trafficking.

The first steps have now been taken in the country to make sure all circuses phase out wild animals, but it will be several years before the last one is freed.

Click on the video above to see how the hairy 'Spice girls' were rescued.