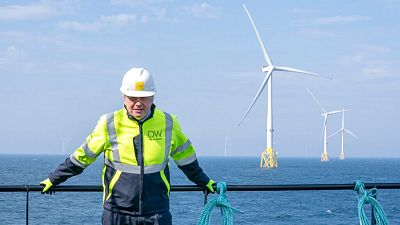 A world-leading hydrogen economy could create thousands of jobs and attract billions of pounds of investment in the UK, the government says.

The country has just revealed its strategy to kick start a low carbon hydrogen sector as part of Prime Minister Boris Johnson’s 10-point plan for a “green industrial revolution”.

This “home-grown clean energy source” could transform the way we power our homes and will be essential in reaching the country’s net-zero targets, claims business secretary Kwasi Kwarteng. He adds that in the future the “hydrogen revolution” could provide a third of the UK’s energy.

“As a leader in high skilled manufacturing, and with an extensive legacy in energy production, the UK stands perfectly positioned to capitalise on the opportunities provided by hydrogen,” says Matthew Fell, chief policy director at the Confederation of British Industry.

With COP26 rapidly approaching, he adds that the creation of a hydrogen economy is an area where the UK can lead by example on the world stage.

Can hydrogen help the UK to decarbonise?

To reach net-zero by 2050, the UK will need to cut emissions wherever possible and capture those it can’t reduce. Up to 35 per cent of the UK’s energy consumption could be hydrogen-based by this date according to a government analysis.

It costs more to produce hydrogen compared to the fuels we already have so there are plans to introduce subsidiaries to cover this.

Hydrogen is a versatile fuel that can be used to power vehicles as well as supplying heat and electricity to our homes. It could go a long way to decarbonising polluting industries including heavy transport like shipping, trucks and trains as well as chemical and steel production.

“A strong hydrogen economy in the UK could cement our place as a green industrial leader if the right action is taken early,” says Jess Ralston, an analyst at the Energy and Climate Intelligence Unit (ECIU).

“The fuel could be very valuable for cleaning up steel production and protecting jobs in this industry – crucial when Europe is already steaming ahead with 23 hydrogen steel plants when we have none.”

A low-carbon hydrogen economy would cut the same amount of emissions by 2032 as would be captured by 700 million trees, the government claims. This is because using it as a fuel does not produce carbon dioxide - but that doesn’t mean producing it is always completely free from emissions.

What’s the difference between green and blue hydrogen?

Projects set to be developed in the UK include both green and blue hydrogen schemes. Green hydrogen is produced when water is split using renewable energy leaving behind only oxygen as a byproduct.

Blue hydrogen on the other hand is extracted from fossil fuel gas and any greenhouse gas emissions are captured and stored underground. Although it is not as clean, producing the fuel this way is cheaper.

UK ministers want a “twin-track” approach to hydrogen production which would see both technologies utilised.

Environmental campaigners believe it could hold the country back in the race to reach net-zero targets.

It says that using both could help to displace fossil fuels faster - but environmental campaigners believe it could hold the country back in the race to reach net-zero targets.

“Hydrogen produced from renewable energy is genuinely low carbon, and genuinely useful in some areas of the economy where electrification is difficult,” says Greenpeace UK chief scientist Dr Doug Parr.

“Producing large quantities of hydrogen from fossil gas locks us into costly infrastructure that is expensive and, according to a study published last week, may be higher carbon than just burning the gas.”

According to the research, “fugitive” carbon and methane emissions involved in creating the same amount of energy could eclipse those from simply burning fossil fuels.

The scientists at Cornell and Stanford University who carried out the study warn that blue hydrogen may be a “distraction” or potentially “delay needed action to truly decarbonise the global energy economy”.

Focusing on green hydrogen could unlock our full industrial potential, bringing with it lifelong jobs in places like the North East.

The UK government says it will set out targets for blue hydrogen projects to ensure they are capturing enough of their emissions to be considered low carbon, but a focus on green hydrogen might be better in the long run.

Ralston adds that the government should be “alive to the risk of gas industry lobbying” which could lock the country into fossil fuel-based tech making net-zero more difficult and expensive.

“Instead, focusing on green hydrogen could unlock our full industrial potential, bringing with it lifelong jobs in places like the North East, supporting both the government’s climate goals and its levelling up ambitions.”