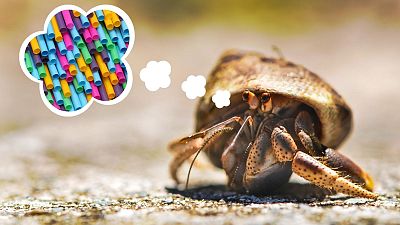 Everyone hates plastic pollution, right? We don’t like seeing photos of turtles caught in abandoned fishing nets, birds tangled in discarded packaging, or the sheer amount of microplastic fish end up consuming.

Well it turns out one particular species doesn’t feel so negatively towards the mounting marine plastic problem - in fact, they are actually turned on by this waste…

You read that right, hermit crabs are attracted to plastic in the ocean.

An additive in plastic named Oleamide is already known to be a sex pheromone and stimulant for particular marine species, including shrimp.

But a research team at the University of Hull have found that when hermit crabs are exposed to the chemical, their respiration rate increases - indicating both excitement and attraction.

“Our study shows that oleamide attracts hermit crabs,” says Paula Schirrmacher, a PhD candidate who worked on the paper.

“Respiration rate increases significantly in response to low concentrations of oleamide, and hermit crabs show a behavioural attraction comparable to their response to a feeding stimulant.

“Oleamide also has a striking resemblance to oleic acid, a chemical released by arthropods during decomposition. As scavengers, hermit crabs may misidentify oleamide as a food source, creating a trap.

“This research demonstrates that additive leaching may play a significant role in the attraction of marine life to plastic.”

Given that the IUCN estimates that at least 7.2 million tonnes of plastic are dumped into our oceans every year, this problem is only going to get worse.

The scientists who worked on this study have produced other papers examining how marine invertebrates along the Yorkshire coast are affected by both climate change and plastic pollution.

Mussels were studied by the team, who looked at how ocean acidification and plastic pollution impacts the species differently - depending on their sex.

“It is critically important to understand how plastic additives work on molecular levels, especially on reproductive success,” explains Luana Fiorella Mincarelli, another PhD student who works in the research cluster.

“We have found that their toxic effect can be amplified in a climate change scenario.”

Mincarelli’s research found that male blue mussels were mostly affected by increases in temperature, while females were more sensitive to a toxic chemical within many types of plastic, known as DEHP.

Her paper concludes that both rising temperatures in the ocean and plastic pollution can have a significant impact on marine invertebrates’ breeding cycles - negatively affecting reproduction rates.