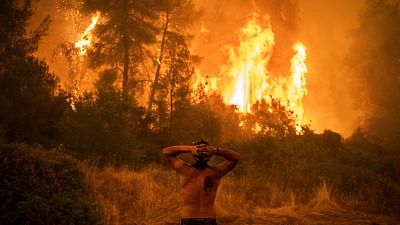 It is "unequivocal" that human activity has caused global warming, says the largest climate change report ever carried out.

The Intergovernmental Panel on Climate Change (IPCC) has published its latest study, concluding that humans' damage to the planet is a "statement of fact."

The report's authors also say that Earth's temperature will almost definitely reach the critical threshold of 1.5°C within the next 20 years at the latest. The Paris Agreement goal of keeping global warming within 1.5°C is said to be "beyond reach."

"If we combine forces now, we can avert climate catastrophe. But, as today's report makes clear, there is no time for delay and no room for excuses. I count on government leaders and all stakeholders to ensure COP26 is a success."

What are the key points from the IPCC report?

This is the most up-to-date assessment of the climate crisis, with more than 300 authors using 14,000 scientific papers to produce the report.

Here are some of the main findings:

Currently, the planet is sitting at a 1.1°C increase in global temperature compared with the pre-industrial era. Already, this has started to have catastrophic effects in terms of extreme weather events.

Keeping below 1.5°C has always been the goal by 2050 but the IPCC report's authors think we will now hit this much sooner, putting their best estimate at 2034.

"We’re in danger of going down in history as species that chose to monitor its own extinction rather than taking urgent steps to avert it," says Caroline Lucas, a Member of Parliament for the UK's Green Party.

We’re in danger of going down in history as species that chose to monitor its own extinction rather than taking urgent steps to avert it.

"The IPCC has produced climate reports for over 30 years - each sounding alarm bells more loudly. The time to act is now."

However, the report is not without any hope. The scientists say if we can still cut global emissions in half by 2030, and reach net zero by 2050 - there is a chance we could halt and maybe even reverse the rise in temperatures.

While any sea level rises associated with global warming would be irreversible, the extreme weather events would possibly become less intense or frequent if we were able to tackle temperature rises.

Ahead of COP26 this November, UN Climate Change (UNFCCC) hopes countries will see the IPCC report as an impetus to strengthen their actions and set more ambitious climate goals.

"2021 marks a crucial year as nations submit their new or updated Nationally Determined Contributions (NDCs), embodying the efforts and actions of each country to respond to climate change and reduce emissions," says a spokesperson for the UNFCCC.

"An initial synthesis of submitted new or updated NDCs early in 2021 showed that collective efforts fall far short of what is required by science to limit global temperature increases by the end of the century to 2C, let alone the desired objective of less than 1.5C.

"Limiting warming to 1.5C can only be achieved through immediate and significantly scaled-up reductions. The only way to reach this goal is through the rapid implementation of more ambitious NDCs."

Currently only slightly more than half of the countries and territories signed up to the Paris Agreement have submitted new or updated NDCs. The UNFCCC wants to see nations use this opportunity to submit NDCs with far more aggressive plans and ambitious goals.

"Pursuing efforts towards 1.5ºC through the implementation of ambitious NDCs is essential for our future and for future generations’ well-being."

Campaigners have responded to the report, criticising the lack of political action in addressing the climate crisis before this point.

"Politicians need to pull their heads from the sand," says Nick Dearden, director of Global Justice Now. "An extreme free market, dominated by big business, fuelled by extraction and colonial exploitation has caused this crisis.

"Doubling down on this system will not save us."

An extreme free market, dominated by big business, fuelled by extraction and colonial exploitation has caused this crisis.

Dearden says if we want to mitigate the damage we've caused, there has to be a major overhaul of our financial systems.

“The IPCC report tells us that devastating climate damage is already locked in. But if we want to prevent the catastrophic consequences, we need to talk about what is hurtling us towards these nightmare scenarios; it’s the economy, stupid," he says.

“We need a radical economic overhaul to rapidly drive down emissions far sooner than the current 2050 target. That must be paid for by the wealthiest who have benefited the most from this crisis, ensuring a just transition for the communities on the frontline.”