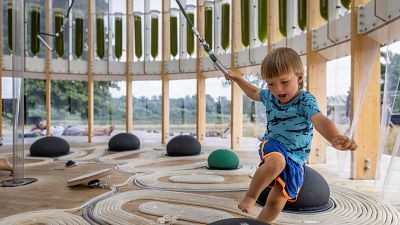 Four-year-old Felek plays in an AirBubble, an innovative playground providing clean air thanks to algae.   -   Copyright  WOJTEK RADWANSKI/AFP or licensors
By Euronews Green  with AFP  •  Updated: 30/07/2021

An innovative playground has been set up in Poland which uses algae to clean the air surrounding children playing.

The 'bubble' is fitted with dozens of glass cylinders containing algae immersed in water that feast on air being pumped in from below.

The green organisms consume polluting molecules and carbon dioxide before releasing clean oxygen out the top of the bioreactors.

With 93% of the world's children breathing polluted air while they play, according to WHO, and Poland as one of Europe's most polluted countries, the invention can't come soon enough.

The AirBubble is set to stay in central Warsaw until November, but could become a permanent fixture. There are plans to install bubbles in other cities too.

Watch the video to take a closer look at the playground.