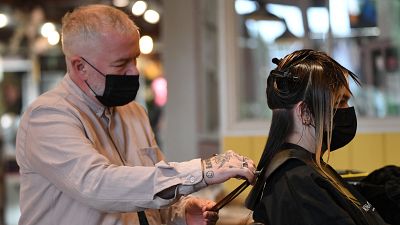 The hair and beauty industry might seem like a frivolous one, but hundreds of hairdressers are working to change that. By diverting easily recyclable materials, such as hair foils and hair itself, they are turning hairdressing into a circular economy.

But in its first year alone the collective of 600 hairdressers or salons has recycled almost 500 kilos of hair and 3.5 tonnes of metal. Any profits made from recycling are donated to charity.

The collective also empower salons and other hairdressing businesses with the knowledge to operate more sustainably.

Salons that are part of the collective can be found here.

What can old hair be used for?

Cut off hair, it turns out, has many uses. "The fact that 99 per cent of it goes to landfill is terrifying really because that’s a lot of good material that we can use, it’s good ingredients," says hairdresser Ryan Crawford.

As a lipophilic material, hair repels water but actively absorbs oil. So it is a very efficient way to clean up oil spills, preventing the oil from damaging the environment. A kilogram of hair can absorb up to eight litres of oil, according to experts.

The idea of using hair filters originated in the United States and has already been tested in real disasters, such as when a Japanese tanker sank off the coast of Mauritius a year ago.

"Britain was lagging behind in recycling unwanted hair when the collective formed last summer", says Green Salon Collective co-founder Fry Taylor. While hair can also make garden compost, chemical waste is turned into energy with the help of the collective.

Watch the video above to see hair and product recycling in action.

Israeli government was ‘not prepared’ for massive oil spill cleanup