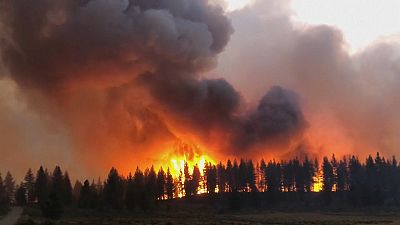 Forest fires have broken out in Russia's Chelyabinsk region near Kazakhstan and in north-eastern Siberia.

The Ministry of Emergency Situations said it has deployed aircraft and a helicopter to fight the fires, as well as 240 personnel to Chelyabinsk where two large villages have been evacuated.

Wildfires are also ravaging northeastern Siberia where temperatures have been abnormally high.

Russia’s coldest inhabited region, Yakutia, is now in the third year of unusually intense fires and around 300 are now burning.

In fact, peat fires had continued to burn throughout last winter in Yakutia, even when the temperature plummeted to minus 50 degrees Centigrade.

In May Alexander Kozlov, Russia's Ministry of Natural Resources, said that, due to global warming, the permafrost is disappearing in northern Russia to such an extent that in a couple of decades it may be possible to farm the land.

Meanwhile in the southern Spanish province of Malaga fire crews have been battling a fire since the early hours of Friday near the small town of Jubrique.

It quickly spread to 300 hectares burning through pine, chestnut and cork trees, according to local reports.

Some 13 families were forced to evacuate.

Windy conditions made efforts to extinguish the blaze difficult with dozens of firefighters trying to control the blaze.

And in northern California which is enduring scorching temperatures, lightning strikes have sparked fires.

Hundreds of firefighters aided by aircraft are fighting the Beckwourth Complex near the border with the state of Nevada.

But so far less than 10 per cent of it is contained.

Campgrounds and homes around Frenchman Lake were under evacuation orders on Friday and a nearly 520-square-kilometre area of the forest was closed because of the danger, fire information officer Pandora Valle said.

After a day and night of explosive growth, the fire covered more than 98 square kilometres at midmorning Friday.

The flames were burning through pine, fir and chaparral turned bone-dry by low humidity and high temperatures, while ridgetop winds and afternoon gusts of up to 45 kph were “really pushing” the flames at times, Valle said.

The fire was one of several burning in the north, where several other large blazes destroyed dozens of homes in recent days.

The number of wildfires and amount of land burned in parched California so far this year greatly exceed totals for the same period in the disastrous wildfire year of 2020.

Climate change is considered a “key driver" of a trend that is creating “longer and more intense dry seasons that increase moisture stress on vegetation and make forests more susceptible to severe wildfire," California Department of Forestry and Fire Protection said recently.

Meanwhile, forecasters warned that much of California will see dangerously hot weekend weather, with highs in triple digits in the Central Valley, mountains, deserts and other inland areas. Heat warnings did not include major coastal populations.

Russia expands state of emergency over wildfires in Far East

In Siberia, volunteers wage war on wildfires with shovels and saws