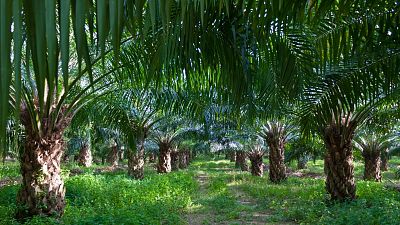 In April of 2018, the Iceland grocery store chain released a video featuring its managing director,  Richard Walker, on a  research trip in Borneo.

“We went expecting to see some palm oil plantations and some forest clearance,” Walker says in a voiceover, as we watch him descending the steps of a regional airplane,  sunglasses perched on his head, and clambering over fallen logs in a  dense rainforest.

“But nothing prepared  me for the industrial scale of what we saw. We witnessed an environmental disaster zone.” The video concluded with the announcement that Iceland would eliminate palm oil from its in-house products by the end of 2018.

Not long after, a snarky video “prepared by Malaysian small farmers” began appearing in the feeds of U.K. Twitter users.

Featuring horror-movie music and captions with random capitalisation, the ad mocks Walker, dismissing him as “Trust Fund  Richard” and contrasting him with the hardworking oil-palm  farmers of Malaysia.

“Multimillionaire Richard took a jet to Borneo,” it says, over footage from the Iceland video, “to lecture Malaysians about the environment.”

It was the latest in a string of campaigns featuring talking points about “eco-colonialists” and trade wars masquerading as health and/or environmental concerns that the Malaysian Palm Oil Council (MPOC) had been trotting out for decades.

“Richard is Taking from the Poor Farmers in Africa & Asia,” concluded the Twitter ad, “to Give to the Rich Western Agri-Corporates that sell Rapeseed & Sunflower.”

In fact, in its ham-handedness (as in its random capitalisation), the Twitter video bore a striking resemblance to another short spot that had surfaced on YouTube some years earlier. “Al Gore’s Penguin Army,” which originally aired in 2006, around the time that the film An Inconvenient Truth premiered, was a spoof of the former vice  president and his environmental concerns.

In the two-minute video,  Gore is seen boring a group of penguins with a lecture and blaming climate change for every woe confronting humanity. The spot’s  crude graphics and juvenile sensibility suggested an amateur production, and the person responsible for posting it described himself as  a 29-year-old from Beverly Hills, California.

But a reporter for the  Wall Street Journal determined that its creator had used a computer  registered to a Washington, DC-based lobbying firm called the DCI  Group.  The firm, which had close ties to the George W. Bush administration, specialises in so-called Astroturf campaigns—corporate  efforts disguised to come off as grassroots movements—and among  its clients at the time that the fossil-fuel-friendly Gore video circulated were ExxonMobil and General Motors.

Soon after the Richard Walker Twitter spot began appearing, news  outlets reported that it, too, was the work of DCI Group. The  video had been promoted by an organisation called the Human Faces  of Palm Oil, which, according to its website, “seeks to advocate on  behalf of Malaysian small farmers” and is a joint project of MPOC and something called NASH, the National Association of  Small Holders, among others.

In an August 2018 proposal to MPOC  and other industry groups, DCI had recommended that independent farmers be the “primary messengers” globally of the campaign against the industry’s critics, with Human Faces of Palm Oil leading the campaign.

The proposal made clear that DCI had been coordinating other grassroots campaigns through industry front groups, including something called Palm Oil Farmers Unite. The Farmers Unite Facebook page features a matrix of National Geographic–esque headshots of farmers from across the globe and says that the organisation “speaks on behalf of 7 million oil palm smallholders” fighting “dangerous campaigns and policies that threaten our livelihoods.”

In the 2018 proposal, DCI also pitched the creation of an African platform with the help of a Nigerian think tank, the Initiative for Public Policy Analysis.

“Recruiting support from African allies is necessary to put maximum pressure on your opponents,” came the pitch from the Beltway strategists. European NGOs and politicians, it added, “fear accusations of neo-colonialism and discrimination.”

That year, Farmers Unite and NASH also took out several ads in Politico Europe, an outlet read widely by legislators in Brussels (where DCI also has an office), denouncing the EU’s palm oil policy as “crop apartheid.”

At a meeting in Kuala Lumpur with MPOC and other industry leaders in early 2019, DCI presented an additional proposal in which it doubled down on its Astroturf strategy.

“Attempting to reason with these opponents, through dialogue or scientific research, will not stop their attacks and will not advance Malaysia’s position,” it said. “Small farmers are Malaysia’s most powerful weapon against Europe and the NGOs.”

In contrast to the media campaigns, smallholder organisations in Indonesia and Malaysia have long complained that their governments support large palm oil corporations and leave their members struggling at the poverty line. The average palm oil worker in Indonesia is likely to make about $6 a day. Malaysia’s daily wage for palm oil  labourers is closer to $9.

The men who run the industry, on the other hand, rank among the wealthiest in all of Southeast Asia. Major  Wilmar investor Robert Kuok, whose net worth is $12.3 billion, is the  richest man in Malaysia. The company’s CEO, Kuok Khoon Hong (a  nephew of Robert), is worth $3.6 billion.

The Salim Group’s Anthoni  Salim has a fortune estimated at $5.9 billion, and when Sinar Mas  founder Eka Tjipta Widjaja died in 2019, he was worth $9.1 billion.

In January of 2019, the World Health Organisation published an article in which it called for greater scrutiny of the health and planetary impacts of palm oil and likened the industry’s tactics—“establishing lobbying structures in political and economic hubs, fighting regulations, attempting to undermine reliable sources of information, and using poverty alleviation arguments”—to those previously deployed by the tobacco and alcohol lobbies.

Writing in the Bulletin of the World Health Organisation, Sowmya Kadandale, of the United Nations Children’s Fund; Robert Marten, of London’s School of Hygiene & Tropical Medicine; and Richard Smith, of the University of Exeter’s College of Medicine and Health, warned of a “cocktail effect,” in which palm oil could be damaging to health when combined with other ingredients used in highly processed foods.

The authors added that the food industry’s marketing of “ultra-processed” products to children also was reminiscent of the way the tobacco and alcohol industries had targeted young people.

The report called the palm oil industry “an overlooked actor in discussions on non-communicable diseases” and suggested that policy-makers consider ways to reduce the demand for oils and for unhealthy ultra-processed foods. It also advised avoiding “the influence of lobbying by food industries whose practices adversely impact human and planetary health.”

Having been issued just six weeks before the DCI Group presented  its follow-up proposal to MPOC in Kuala Lumpur, the WHO report  may have provided the lobbying group with some of its talking points.

“The eco-colonialists have turned to a scorched earth approach of  junk science and faulty logic,” DCI wrote in its pitch. “They label  palm oil as the new tobacco.” The group’s proposal involved a budget  of more than $1 million.

Excerpted from Planet Palm: How Palm Oil Ended Up in Everything—and Endangered the World, by Jocelyn C. Zuckerman

Your chocolate Easter egg could be fuelling deforestation