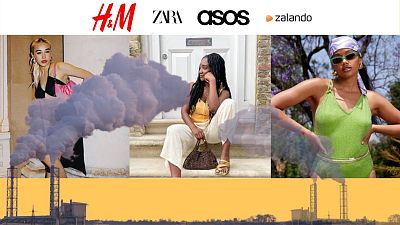 The world’s biggest fashion brands are lying about what their clothes are made from in a bid to be seen as more sustainable than they actually are, a major new report has found.

The report by Changing Markets Foundation found that “greenwashing is rife” at both high street and luxury brands.

According to the report, brands like ASOS have been deceiving consumers.

“ASOS has...been caught lying to its customers. A pair of ASOS trousers claim to be ‘mono-material’ and therefore ‘designed to be remade’ or recycled. Yet, the product is actually a blend of 54 per cent nylon and 46 per cent polyester – a mixture impossible to recycle with current technology,” it says.

The results show that 60 per cent of claims by UK and European fashion companies, including Zara, H&M are unsubstantiated and misleading consumers.

The majority of green claims flouted UK Competition and Markets Authority guidelines in some way.

“These guidelines set out principles which green claims should adhere to, such as the need to be accurate and to not hide relevant information from consumers,” George Harding-Rolls, campaign advisor at Changing Markets, tells Euronews Green.

The investigation discovered that numerous fashion brands’ green claims were “ignoring these rules,” he adds.

So what’s a concrete example of how brands are deceptive in their marketing?

“Zalando has misled consumers by listing a pair of fake leather leggings as sustainable, despite the use of PVC – a material that contains chemicals such as phthalates which cause long term harm to health,” says Harding-Rolls.

Who are the worst offenders?

Two high-street brands came out on top as the most egregious offenders when it came to flouting guidelines.

The report also found that these four brands are the most addicted to fossil fuel-based fibres.

Of those mentioned, no brand has thus far made a commitment to end the use of fossil-fuel based fibres.

What do the experts think?

Livia Firth, co-founder and creative director at Eco-Age, is renowned for creating campaigns around environmental justice and specialises in integrating sustainability into the fashion industry.

As a supporter of the Changing Markets Foundation report, she says, global brands have an “addiction to plastics” and that there is an “emptiness” to many of their sustainability claims.

“There is so much greenwashing regarding circularity - a much needed business model we all need to adopt, but made nearly impossible in the fashion industry by the vast amount of synthetic fibres used,” says Firth.

She continues, “we have also been working for a few months at EU level to make sure that the proposed PEF (Product Environmental Footprint) label uses the correct methodology, and we hope the EU Commission will take this groundbreaking report into consideration.”

The problem with synthetics

Synthetic fibres represent over two thirds (69 per cent) of all materials used in textiles, according to the report. This figure is expected to balloon to nearly three quarters by 2030, of which 85 per cent will be polyester, a material produced from fossil fuels such as oil and fracked gas. The production of synthetic fibres currently accounts for 1.35 per cent of global oil consumption, which exceeds the annual oil consumption of Spain and amounts to 1.29 billion barrels of oil a year.

Cheap synthetic fibres are not only harmful because they go into low-quality clothing that ends up in landfill. They also perpetuate the fashion industry’s dependence on fossil-fuel extraction during a climate emergency.

Microplastics also emerged as a critical blindspot for most brands. Despite the known damage they cause to human and environmental health, the vast majority of brands were found to be asleep at the wheel when it comes to microplastics, delaying meaningful action.

The report urges brands to tackle their addiction to fossil fuel-derived synthetics, to commit to ambitious climate targets and invest in truly circular solutions. Consumers are encouraged to think twice about their purchases and to question the integrity of the shops they are buying from before purchasing.

In response to the allegations made, an ASOS spokesperson said,

"The reality is that there is no silver bullet to this challenge, and a wholesale switch from synthetic to natural fibres can create other impacts – for example, water use or land degradation - so it's important we work together as an industry to get this right. As a Textiles 2030 signatory, we're committed to collaborating with industry colleagues to find and develop system-wide solutions to build a more sustainable product mix and tackle the use of virgin synthetics."

A Boohoo Group spokesperson responded with,

“Tackling these complex issues will require collaboration, which is why we are a member of the sustainable apparel coalition and a proud signatory of the Textiles 2030 initiative. In March, we published our sustainability strategy which contains a series of measurable targets designed to reduce our environmental impact and textile waste. In May, we published our sustainability report which measures the progress we are making against the challenging targets we have set ourselves. Together, polyester and cotton account for over 80% of the fibres we use and so we are tackling these first. We are working to ensure that all of the polyester and cotton we use is either recycled or more sustainable by 2025.”

"The Changing Markets report itself concludes 'Zara made the fewest claims in contravention of the guidance'. It also commented that Zara was the most comprehensive at substantiating and verifying its sustainability claims."

A spokesperson from H&M said,

"The report raises important challenges for the whole industry, including the use of fossil-fuel based fibers for fashion products and the importance of credible sustainability claims, two areas in which we have been proactively working for many years. However, we don’t recognise ourselves in the way we are depicted in regards to misleading claims. We base all our product sustainability claims on credible third-party certification schemes for our materials to ensure sustainable sourcing and integrity."

Walmart, UNIQLO and Forever 21 have not replied to Euronews Green's request for comment. Zalando declined to comment.