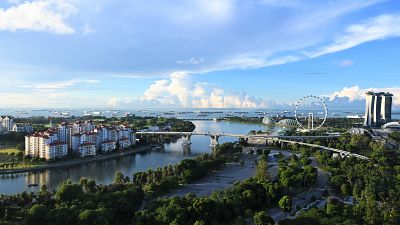 More than four billion people globally live in urban areas -that’s more than half of the world’s population. By 2050, the UN predicts that this number could grow to two-thirds of people globally.

These communities are also on the front lines when it comes to climate change. Those living in urban areas are increasingly affected by rising temperatures and air pollution. In 136 coastal cities, damages from climate-related extreme weather could cause up to €2.6 trillion of damages by 2050 if we don’t adapt.

With three-quarters of all energy consumed worldwide used by people living in cities, transitioning towards renewable energy is vital to tackling climate change. These are potential areas where phasing out fossil fuels can have a big impact on the future of our planet.

After lockdowns resulted in less air and noise pollution last year, a report from international policy network REN21 has found that many of our metropolitan areas are already making changes.

In 2020, the number of cities around the world with a partial or complete ban on fossil fuels increased fivefold. Compared to 2019, 10,500 cities have now adopted targets to reduce CO2 emissions and 800 have committed to reaching net-zero. As the use of sources such as solar and wind increases, one billion people now also live in cities with a renewable energy target or policy already in place.

Rapidly replacing polluting fuel sources with renewable energy, the report found, is a ‘critical factor’ in the success of their climate policies.

“With their impact at scale, cities are our best bet to plan, develop and build a renewable future,” says Rana Adib, REN21’s executive director.

“But all too often their potential for transformation remains massively underused.”

Good but not good enough

Some of the world’s biggest contributors to emissions are air conditioning, heating systems and transport - factors that are best addressed at a local level. Adib points to cities like Hamburg, San Francisco and Shanghai as good examples of places striving to replace fossil fuels.

Following the example of cities in China and America, Hamburg announced last year that it would only purchase emissions-free vehicles. When it comes to developing new buildings, the government has imposed renewable energy obligations and it is the only city in Germany to have banned oil-based heating and air conditioning.

“As one of the single biggest purchasers of energy in London, it is important that TfL leads the way on green energy,” he said at the time.

But while these examples are inspiring, Adib adds, “we are still a far cry from what is needed to curb climate change in time”.

Obstacles in the way of a green transition

There are still a number of large cities lagging behind when it comes to ditching fossil fuels. In France, 14 cities out of 123 have renewable energy targets or policies in place. Just three, Dijon Nantes and Paris, were striving for net-zero emissions, the report says.

It is a familiar story for many as even those keen to cut carbon emissions frequently run into opposition. Adib says that wherever we see cities pushing to phase out polluting energy sources, there are powerful fossil fuel interests that fight decarbonisation plans.

A number of major cities in the US have started to consider phasing out natural gas for cooking or heating in the last few years including Seattle, New York and Denver. But these kinds of climate policies have led to a battle that has seen some states enact laws to prevent them. Opponents say higher costs, security in the face of extreme weather and preferences for gas cookers stand in the way.

“They take local authorities to court or, as seen recently in the US, convince state policymakers to make it legally impossible for cities to take such decisions at all,” Adib explains.

Financial support is vital to ensuring this keystone for reducing global emissions is properly explored. In turn, decarbonising our cities has the potential to create jobs as well as providing citizens with greater quality of life and better health outcomes.

“We can both increase the level of ambition and progress in meeting national climate commitments if national and regional governments around the world provide cities with support well beyond the creation of better financial conditions.

“Getting over territorial boundaries to empower cities means unleashing the power of our strongest allies.”