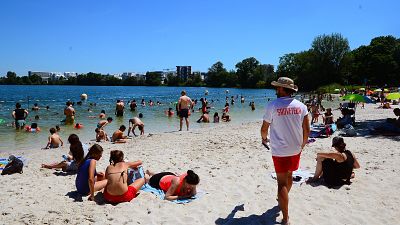 People gather on a sunny afternoon as rescuer walks on the beach of the Lake of Bordeaux, south-western France.   -   Copyright  MEHDI FEDOUACH/AFP
By Rosie Frost  •  Updated: 23/06/2021

As the weather warms up, many of us are choosing to escape the heat by taking a dip off beaches or in lakes and rivers.

The European Union has the largest maritime territory in the world with 70,000km of coastline and 110,000 seas, rivers and lakes. Millions of us every year regularly use these massive natural resources for sport or recreational activities. But how do we know the water we are swimming in is clean?

With so many people benefitting from Europe’s waters, the European Environment Agency (EEA) issues an annual report on the quality of Europe’s coastal and inland bathing waters.

Almost 83 per cent of Europe’s bathing sites had ‘excellent’ water quality in 2020 according to the latest data. Only 296 of the 22,276 coastal beaches and freshwater bathing sites tested were found to have poor quality water.

“Bathing water quality in Europe remains high and it’s good news for Europeans, who will be heading to beaches and bathing sites this summer,” says Virginijus Sinkevičius, Commissioner for the Environment, Fisheries and Oceans.

“This is the result of more than 40 years of Bathing Water Directive, hard work by dedicated professionals and cooperation.”

Cyprus came out on top with all 110 of its sites receiving the highest rating. In the last year that data from the country will be included in the rankings, the UK was found to have the worst bathing water quality in Europe.

Do Europe’s beaches, lakes and rivers really have ‘excellent’ water?

The results seem encouraging and since the first Bathing Water Directive was introduced in 1979, the quality of Europe’s bathing water has improved significantly.

This set of mandatory quality standards, monitoring requirements and information obligations has helped countries across the bloc to manage water standards.

“EU law has not only helped raise the overall quality, but also helped identify areas where specific action is needed.”

But some environmental advocates are worried that the information being provided to the public doesn’t paint a full picture of how polluted our waters actually are.

You cannot say that while you're not monitoring all the other pollutants that exist, plastic pollution but also chemical pollution and many other impacts we have like, like algae blooms.

Ocean protection NGO, The Surfrider Foundation believes the results from the EEA’s report ‘“in no way reflect tangible reality” as many kinds of water pollution are not being measured.

“When you read the many reports from the environmental agency saying that the state of our oceans is dire, then you wonder why every year the Commission comes out with comes up with a report saying we have excellent water quality,” Gaëlle Haut, head of European advocacy for The Surfrider Foundation Europe tells Euronews Green.

“You cannot say that while you're not monitoring all the other pollutants that exist, plastic pollution but also chemical pollution and many other impacts we have like algae blooms.”

What kinds of pollution are included?

Currently, only popular beaches, rivers and lakes are checked during the busy summer months. If a problem is found, then the site is closed to the public rather than addressing the issue at its source.

When the water at these sites is tested, it is for two forms of bacteriological contamination (enterococci and Escherichia coli) while problems like plastic pollution and algae are checked visually.

“We know firstly that plastic pollution, what you can see at the surface is only one per cent actually of what's in our seas and waters so this is absolutely insufficient to be checking visually,” explains Haut.

She adds that this is even more of a problem for microplastics where, without proper testing, it is impossible to determine just how many of these tiny fragments are present. Though our understanding of how they affect our health is still limited, as Haut puts it “absence of evidence is not evidence of absence” and what we do know is already pretty damning.

Chemical pollution is another important issue the Bathing Water Directive does not address. Just over a third of Europe’s surface waters are thought to have a good chemical status.

“We know they have implications for public health. It’s a bit common sense but chemical contaminants are not good for you,” says Haut.

While other legislation to protect the bloc’s waters includes this kind of pollution in its measures to protect fresh and marine waters, those covering how clean the water we swim in does not.

What needs to change to ensure our bathing waters are pollution-free?

As part of the EU’s Zero Pollution Action Plan, the Commission has launched a review of the Bathing Water Directive. Sinkevičius says that the plan, adopted last May, “will help to keep the waters healthy and safe and our seas and rivers clean”.

The Commission wants to find out if the current rules are still fit for purpose when it comes to protecting public health and water quality. It acknowledges that they may need improving and one of the things it is looking to change is the limited parameters used to determine whether bathing water is up to standard.

According to The Surfrider Foundation, now is the perfect time to make these changes which include new parameters such as chemical pollutants, plastics and algae. Earlier this month, the organisation delivered a manifesto to the European Commission outlining what was needed for a "fairer approach" to reality.

Their manifesto also asks for the public to be more involved in the process.

“Often those going into the sea on a daily basis are the first observers of pollution,” says Haut. She adds that the NGO has many testimonies of people who have suffered from health problems after being in the water but don’t know where or how to report them.

More public participation, then, could actually help to highlight problems before they become more serious. People are keen to be involved in the protection of their communities and health, more so than ever over the last year.

“Because of COVID, people care more and more and see more links between the environment and our health,” Haut says.

“We really think there should be more ambition, especially with the times we're living in.”