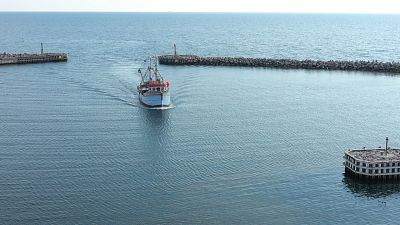 This month in Climate Now we report on the big changes underway in our oceans from a fish market in Denmark.

We see how climate change is playing a big role in the rapid evolution of fish populations worldwide, with species that can migrate now moving to cooler habitats, while those that are left struggle to survive.

Before we dive into the details of Danish fishing, a quick look at the latest data from the Copernicus Climate Change Service.

May continues the cold spell in Europe

In Europe, we saw the cold spell from April continue into May with temperatures -0.5 degrees below the new 1991-2020 average.

Overall, the climate figures for May show a great deal of contrasts, illustrated by the map below showing surface air temperature anomaly.

There's a clear disparity between the cold blue over Europe and the area of red over central Asia where temperatures were five degrees above average last month.

There were also some real extremes. Inside the Arctic Circle there was a brief surge of warm weather with the village of Nizhnyaya Pesha hitting 31 degrees on the 20th of May.

In regards to precipitation anomalies, we can see some parallels with the temperature maps. Areas that were warmer, like Greece, Turkey and Russia, were also drier.

In north-western Europe it was both cold and damp. For example, Wales had its wettest May on record with 245 millimetres of rain.

Climate change is a global issue with global effects that many of us will be aware of on land. However, the oceans absorb the majority of the excess heat in our climate system, and the waters or our planet are warming, too.

This is having a direct impact on fish populations, with those species which are able to move to new habitats now shifting into areas to the north or south where the temperatures better suit their metabolisms.

The reason is that fish are particularly sensitive to changes in temperature, due to being cold-blooded animals. They also live in habitats close to their upper temperature limit, meaning that even a slight change in temperature can impact their ability to feed and breed.

We went to the fish auction at the Danish port of Gilleleje, north of Copenhagen, to get the measure of the changes on the ground. Local fishers in this area say they are under pressure from restrictive quotas, they complain that agricultural run-off is polluting the water, and they're also witnessing the effects of climate change.

This means that they're finding new kinds of fish in their nets. According to the auctioneer, Lasse Nordahl, this year they're starting to see octopus, a species they didn't see before, and the appearance of witch flounder.

"We didn’t see them when I started here", he tells Euronews.

Red Mullet and hake are other examples of species of fish often found further south in Europe which are now ending up in Danish waters.

Mark Payne a Senior Researcher at the Technical University of Denmark, explains that the reaction of fish to climate change is quite clear and evident. They are moving because they can't find respite from unfavorable temperatures, unlike mammals and lizards on land.

"On land, if it gets too hot, you can go and shelter under a tree or maybe burrow, whereas the ocean tends to be much more uniform. There is no shelter. It's much more difficult to get respite from challenging conditions than it is on land," he explains.

The Technical University of Denmark has been monitoring Danish waters for many decades, and its surveys have clearly shown the effect climate change is having in recent decades.

According to Louise Lundgaard a Research Technician at the university, there are two key trends: the arrival of species associated wiht Biscay and the Mediterranean, like tuna, hake and anchovy, and the decline of local fish like Baltic cod.

The decline is clearly visible in the size and weight of the cod. "A cod that's four years old is smaller than it would have been, for instance, ten years ago," she explains. This is due to the fact that they are focusing more on reproducing than they are on growing.

"That can be both because of the temperature of the water, the condition of the food, the amount of food and a lot of factors," she concludes.

These changes occurring in Denmark are happening worldwide too, and it has broad implications, according to Mark Payne. "It certainly creates a challenge for all of the communities and businesses that are dependent on the ocean," he says. These people are now forced to "adapt their fishing techniques, how they store and process fish, and essentially also how they sell the fish further down the supply chain."

As consumers, we can play an important role in managing and adapting to this transition by buying fish that is considered to be sustainably sourced.