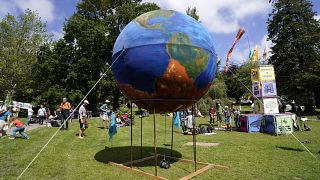 G7 leaders are talking about climate change on the final day of their summit in England, with a warning from one prominent naturalist ringing in their ears.

Broadcaster and natural historian Sir David Attenborough says their decisions are "the most important in human history", adding that urgent action is needed to avoid human-based environmental catastrophe.

All G7 countries have pledged to reach net zero carbon emissions by 2050, but many environmentalists say that will be too late. At the summit in Cornwall, the leaders also plan to announce new green-financing plans to help poorer countries reduce carbon emissions.

Attenborough, who addressed the leaders on Sunday by video, said global warming and loss of biodiversity are “beyond doubt,” as is the fact that “our societies and nations are unequal.”

He said “the question science forces us to address specifically in 2021 is whether as a result of these intertwined facts we are on the verge of destabilizing the entire planet?”

“If that is so, then the decisions we make this decade — in particular the decisions made by the most economically advanced nations — are the most important in human history,” Attenborough said in comments released by summit organisers.

Hundreds of environmental protesters took to the Cornish seaside on Saturday to highlight the issue.

Large crowds of surfers and kayakers took to the sea in a mass paddle protest to urge more action on protecting the oceans, while thousands chanted and beat drums as they marched outside the summit’s media center in Falmouth.

“G-7 is all greenwashing,” the protesters sang. “We’re drowning in promises, now’s the time to act.”

One of the summit's key aims has been to set the stage for the UN climate conference being held in November in Scotland.

Climate activists and analysts have said filling a $100 billion (€82.5 billion) annual fund that is intended to help poor countries tackle the effects of global warming should be at the top of the G7's to-do list.

UK Prime Minister Boris Johnson’s office said he met with UN Secretary General Antonio Guterres on Saturday and that the two agreed on the need for countries to step up and make ambitious commitments to cut carbon emissions and phase out the use of coal.

But very little substance on the topic has so far emerged from the talks.

The Group of Seven leaders are expected to end their first summit in two years with a list of promises, including tackling climate change with a blend of technology and money -- as well as vaccinating the world against the coronavirus and forcing multinationals to pay their fair share of tax.

The leaders' final communique is expected to formally embrace placing a global minimum tax of at least 15% on large multinational companies to stop corporations from using tax havens to shift profits and to avoid taxes.

There have been ambitious declarations about girls’ education, preventing future pandemics and using the finance system to fund green growth. The leaders have vowed to share vaccine doses with less well-off nations that urgently need them. Johnson said the group would pledge at least 1 billion doses, with half that coming from the United States and 100 million from Britain.

World Health Organization Director-General Tedros Adhanom Ghebreyesus commended the vaccine pledge but said it's not enough. To truly end the pandemic, he said, 11 billion doses are needed to vaccinate at least 70% of the world's population by the middle of next year.

The G7 leaders have also backed the Biden Administration's "Build Back Better" world plan, to help low and middle-income countries with infrastructure. The move is a response to China’s “belt and road” initiative, which has increased Beijing’s influence in countries around the world.

But on Sunday morning it was uncertain how firm the group’s commitments will be overall when the leaders issue their final communique. It was also unclear whether all of the leaders would back the United States’ call to chastise China for repressing its Uyghur minority and other abuses.