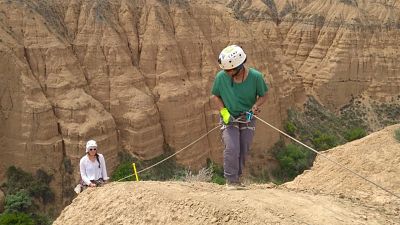 A virtually unbroken record of climate change has been found in an 80-metre thick layer of sediment in Charyn Canyon, Kazakhstan.

This new discovery provides a “missing link” for understanding how land, atmosphere and oceans have interacted over the last five million years.

Scientists from the Max Planck Institute for Chemistry in Mainz, Germany, abseiled down into the canyon to take a series of samples from alternating layers of dust and soil. They analysed these samples to work out how much moisture there was in the earth through time.

This allowed the team to reconstruct a historic record of rainfall in the region that could help predict climate change in the future.

“Over the past five million years, the land surfaces of Eurasia appear to have more actively contributed to the land-atmosphere-ocean water-cycle than previously acknowledged,” says paleo researcher Charlotte Prud'homme.

“The sediments preserved at Charyn Canyon acted as a litmus test for the influx of fresh water into the Arctic Ocean, stimulating the transport of moist air masses from the North Atlantic back onto land via westerly air flows.”

Why is this discovery important for climate change?

Modelling the past, present and future of our planet’s climate is a difficult task.

The EU is currently in the process of building an ambitious ‘digital twin’ of Earth that would simulate the atmosphere, oceans, ice and land. But, to create long term predictions, we need data about how our climate has behaved in the past.

To create long term predictions, we need data about how our climate has behaved in the past.

Much of the research on how Earth’s weather systems have evolved has focused on oceans, lakes and ice caps but terrestrial environments have not been so thoroughly explored. Until now, little was known about the role that landlocked regions like Central Asia play in global climate evolution.

“We needed to find a place that was inland and as far away from the ocean as possible,” says Kathryn Fitzsimmons from the Max Planck Institute for Chemistry.

“We could hardly find a more continental situation than at Charyn Canyon in southeastern Kazakhstan.”

The researchers focused their investigation on the Pliocene and Pleistocene periods. The Pliocene, between 5 to 2.6 million years ago, was the last time concentrations of carbon dioxide in the atmosphere were comparable to what they are today.

“That’s why our insights from the Charyn Canyon sediments are so essential for understanding future climate," Prud’homme says.

She adds the discovery has “opened a door” for future climate models.