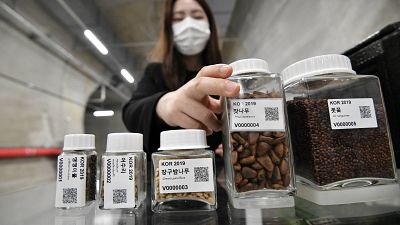 a researcher displaying seed samples in a tunnel at the Baekdudaegan National Arboretum Seed Vault Centre in the southeastern mountainous county of Bonghwa.   -   Copyright  JUNG YEON-JE/AFP or licensors   -
By Doloresz Katanich  with AFP  •  Updated: 02/06/2021

In preparation for 'doomsday', nearly 5,000 wild plant seeds are being stored securely in a South Korean mountain.

The Baekdudaegan National Arboretum Seed Vault Centre is one of only two such facilities in the world. The other one is in a remote Arctic Norwegian archipelago, Svalbard, and stores samples of food crops.

There are nearly 100,000 seeds from 4,751 different wild plant species held in Bonghwa, South Korea. The aim is to keep them safe in case they are lost to "apocalyptic events", caused by climate change, natural disaster, war or nuclear attack.

The facility was built in the "safest spot" in South Korea and is designed to withstand a 6.9-magnitude earthquake or even an atomic strike.

The tunnel lies 46 metres deep under the ground, originally a security installation by South Korea's National Intelligence Service, surrounded by wire fences and dozens of cameras.

Researchers claim that the importance of preserving seeds - the original source of the crops we eat today - should not be overlooked.

Many crop relatives in the wild that could provide genetic diversity to help long-term food security "lack effective protection", according to the UN.

Wild plants hold potential as future medicine, fuel and food, stated the Royal Botanic Gardens Kew in a report last year, but around two-fifths of them are threatened with extinction, largely due to habitat destruction and climate change.

The vault's samples are largely of flora from the Korean peninsula, but have capacity for two million seeds to be stored.

Click on the video above to take a look inside the vault.