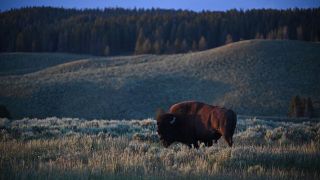 The past twenty years have been the hottest that Yellowstone has seen in the 1,250 years of records.

A team of researchers from the University of Idaho in Moscow took samples of living and dead Engelmann spruce trees from high elevations in and around the US national park. From this, they were able to extend the record of maximum summer temperatures by more than 1,000 years.

Temperature records at the park had previously only gone back to 1905.

Tip Tuesday: To avoid crowds and traffic, venture into the park early or late in the day (generally, before 10 a.m. and after 3 p.m.). It is also a good time to see wildlife, fog in geyser basins, or a spectacular sunrise or sunset! pic.twitter.com/areA0GtI7e

"The records show that the 1080s were extremely warm and in the 16th century, there was a period of prolonged warmth for about 130 years," says team leader Karen Heetner.

However, these hot spells were different to what we’re seeing now. Previously, temperature rises had a large degree of variation over the decades, even when it was unusually hot. The past twenty years, on the other hand, show prolonged warming without spells of cooling.

"The warming trend we see beginning around 2000 is the most intense in the record. The rate of warmth over a relatively short period of time is alarming and has important implications for ecosystem health and function," she says.

What could this mean for the park?

In 2015, the park published an outline of what they expect to happen over the next 100 years. Rising global temperatures will reduce the level of snow, which nourishes the park’s rivers and geysers. Geysers will likely erupt far less often. This is already beginning to happen.

Wildfires in the park are due to become more frequent with many of the park’s animals disappearing. The park’s forest could completely disappear, being replaced by a prairie.

When I die, bury me at Yellowstone. pic.twitter.com/4VuBrBLIg3