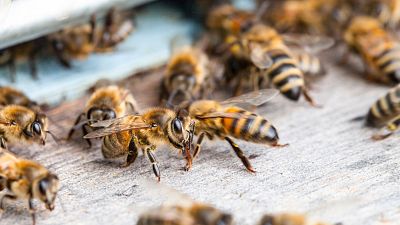 It's World Bee Day - a time to celebrate one of nature's most precious pollinators.

Ukraine is one of the main producers of honey in Europe. Around 1.5 per cent of Ukraine's population is engaged in various forms of beekeeping, according to the United Nations.

In homes fit for a Queen, their hives are made in trees from a tradition dating back to medieval times. The deliciously sweet product harvested from wild bees is believed to have a special taste.

It is a craft handed down from generation to generation by those who believe wild bees are healthier and their honey tastes different.

Maksym Bortnyk, a honey hunter, makes new hives by hollowing out logs. He then carefully chooses the tree and where to position the hive so it's protected from the winds to ensure the bees inside can survive the cold Ukrainian winters.

"I have left some smell of old bee colony there," Bortnyk said, "I used old wax for it. Hopefully, bees will feel it and will come to live in this beehive."

But experts say traditional beekeeping, where a colony can be better controlled and monitored, is vital.

Two years ago, it was noted that bee populations were declining due to the use of pesticides, habitat destruction, and climate change.

Around 90 per cent of the world's wild flowering plant species depend on pollination, according to the UN's Food and Agriculture Organization (FAO).

With flowers and food crops depending on pollination, a threat to bees is a threat to global food security and nutrition.

To see the bees, click on the player icon above.

6 simple ways you can help save bees from extinction