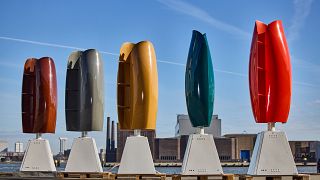 What if producing renewable energy could double as eco-art? A company in the Netherlands is producing 'wind tulips' to make clean energy production less of an eyesore.

Europe is currently working on becoming climate neutral by 2050 (producing net-zero emissions), but the popularity of traditional wind turbines is not at an all time high. The main reason is the noise they make and their adverse environmental impacts, such as spinning turbine blades posing a threat to flying wildlife like birds and bats.

The development of vertical turbines poses a solution to this problem.

They are quieter and smaller and work easily with changing wind direction. Just a few of them sitting on a rooftop can cover a large part of a household's energy consumption.

"The idea is to combine efficiency with art," says Regional Director Roy Osinga.

The future of energy transition is that there is no one source of energy. So we have to use multiple sources.

The shape is not only for pleasing the eyes, it also comes with aerodynamics that make the small wind turbines produce more energy per square metre than solar panels in windy areas.

Manufacturing in Europe had just started right before the pandemic hit.

"Nobody knew what was coming. And actually, quite rapidly, we found out that the demand for green solutions did not stop," says Osinga. "I think we’re even moving faster because the pandemic really shows us that we have to change."

The wind tulips are already cropping up in crowded public places and urban rooftop settings in the Netherlands and in Germany.

Click on the video to learn more about this project.