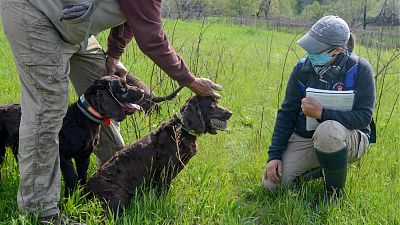 Boykin spaniels have become an unlikely ally in the fight to save ornate box turtles. The specially trained dogs can sniff out the turtles, thereby allowing conservationists to carry out health assessments on the animals.

The four-legged volunteers can sniff out 2.5 turtles per search hour, compared to the one turtle every four or five hours for a biologist.

“The dogs have been immensely beneficial in finding the turtles at a much faster rate than we can. They are a tremendous tool for conservation”, says Dr. Matt Allender, Chicago Zoological Society clinical veterinarian and director of the University of Illinois Wildlife Epidemiology Laboratory.

Ornate box turtle are one of two species of box turtles in the US state of Illinois. Both have experienced habitat destruction and sharp population decline due to human encroachment.

The dogs were a key part of the conservation work, run by Chicago Zoological Society and University of Illinois researchers. Now in its 15th year, it is the longest and largest-ever study of its kind.

The dogs have been immensely beneficial in finding the turtles at a much faster rate than we can.

We have more in common with turtles than you might think. Both species use land and sea, live long lives, and have a relatively small home range. So the health of a box turtle is very much a reflection of the condition of the environment and its natural resources. So this conservation work provides information that helps protect the health of many species, including people.

Once the turtles are located, researchers make notes about the animal's eyes, ears, nose, and take physical measurements along with a blood sample. This data is added to the last 14 years of information. This survey is helping researchers determine what is threatening the environment and the health of the species.

"The health of the ornate box turtle is a reflection of the health of the environment that we draw our natural resources on," says wildlife veterinarian and researcher Dr Matt Allender.

Keeping track of their health condition, such as liver and kidney diseases and various viruses, helps save box turtles as well providing information on how best to protect the health of many other species, including people.

Click on the video above to see the dogs in action.