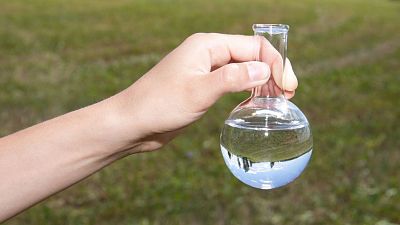 The vial is being kept at Canada's National Science Museum as its oldest artefact   -   Copyright  Canva
By Shannon McDonagh  & Hope Talbot  •  Updated: 16/05/2021

The world’s oldest known water has been discovered by researchers in Canada.

A 17-year search of Ontario’s Kidd Creek Mine uncovered liquid that has been trapped between rocks for 1.6 billion years, according to the team at the University of Toronto.

After first visiting the Kidd Creek in 1992, geologist Barbara Sherwood Lollar and her colleagues would return to the site many times over the years in search of water trapped within the rocks of the old mining site.

Her team ventured 2.4km below the ground in the search, guided by the distinct smell of the ancient water itself. It’s high saline content is up to ten times saltier than sea water.

“It literally is following your nose right up to the rock, to find the crack or the fractures where the water is discharging,” Sherwood Lollar explains.

Her team ventured 2.4km below the ground in the search, guided by the distinct smell of the ancient water itself.

Their probing has now produced “one of the deepest and longest scientific observatories for fluids and deep microbiology in the world.”

The vial is now stored at Canada’s National Science Museum and as its oldest ever artefact.

How did they know how old the water was?

The true age of the water was not immediately apparent to researchers - it wasn’t until investigating it further that the team came to realise the true magnitude of their findings.

When testing the water for chemicals and bacteria, tiny microbes, the kind only ever seen deep below the sea on the ocean floor, were found rife within the sample.

This type of bacteria had never been recorded before on land, and was one of the first clues that the water source may be much older than first thought.

Samples were sent to the University of Oxford and tested using a mass spectrometer. The verifiers believed their equipment, some of the most advanced in the world, had broken when provided an average age of 1.6 billion years old.

It took over four years of rigorous testing to confirm an accurate age for the water.

Present day problems with inadequate global water infrastructure and water scarcity have made this confirmation all the more encouraging.

What this means for Mars

The team believes the rocks containing this water once existed as sea beds millions of years ago.

While NASA makes strides in the Perseverance rover’s production of new oxygen on the planet, water is still regarded as Mars’ final inhabitability frontier.

The planet’s pressure makes it impossible for large quantities of water to exist on its surface. In recent years three sludgy “lakes” have been discovered 1 kilometre below the crust of the icy planet, based on samples spanning several years.

Counter arguments against the legitimacy of these water sources propose that the salt content, an even greater concentration of twenty times more than sea water, would render it unusable.

Others say there are no heat sources on a planet with an average temperature of minus 62 degrees to transform this briney fluid into water as we know it.

Could the outcomes of finding this Earth water artefact be a promising hint that there is more to be found in Mars’ water supply? And if so, will NASA have to dig a little deeper for it?