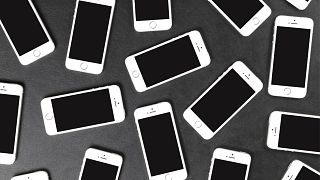 Smartphones use millions of transistors in each device can't currently be recycled   -   Copyright  Canva
By Shannon McDonagh  •  Updated: 06/05/2021

The world’s first fully recyclable, printed electronics are being developed in the US to combat gadget waste.

Scientists at Duke University have created a fully functional transistor made out of three carbon inks that can easily be 3D-printed on to paper to replace the unsustainable silicon chips many devices use.

This new technique presents promising solutions to the tech industry’s hardware production “epidemic”. Transistors have been a historically complex component for scientists to try and reproduce and dispose of in an environmentally-conscious way. An average smartphone needs millions of the tiny devices to function.

A culture of ever-advancing technology has created unsustainable environmental outcomes as electronic products are discarded in favour of new models. The United Nations currently estimate that only a quarter of all electronic products go on to be recycled in some capacity because of this.

Much of this material tends to be the copper, aluminium and steel associated with the hardware of PC’s, smartphones, and tablets - their inner workings paint a more complicated picture.

A path to recyclability through wood-based ink

Creating recyclable transistor technology of this kind has been ushered along by the development of ‘wood-derived insulating dielectric ink’ called nanocellulose.

The scientists were able to extract this by sprinkling table salt on tiny wood fibers, resulting in an ink that, when combined with other printable inks, provides a strong substitute material.

“Nanocellulose is biodegradable and has been used in applications like packaging for years,” says Aaron Franklin, the Professor of Electrical and Computer Engineering at Duke.

“While people have long known about its potential applications as an insulator in electronics, nobody has figured out how to use it in a printable ink before. That’s one of the keys to making these fully recyclable devices functional.”

The material stands the test of time

So far, the materials created in this process show no signs of letting up six months after their original printing. Scientists at Duke have also tested the ink by submerging it in a series of baths under different sound wave pressures with an average retention of nearly 100 per cent.

When the new transistor eventually packs up it can simply be recycled due to its wood components, along with the paper it was produced on.

Last decade saw waste from electronic devices become the fastest growing stream of unmanageable disposal in the world. The next step for printable recyclable electronics would be to find a way to put these components into entire computer processors.

Professor Franklin acknowledges that it will be a challenge to cover ground in a half-trillion dollar hardware industry.

“Silicon-based computer components are probably never going away,” he says.

“But we hope that by creating new, fully recyclable, easily printed electronics and showing what they can do, that they might become widely used in future applications."