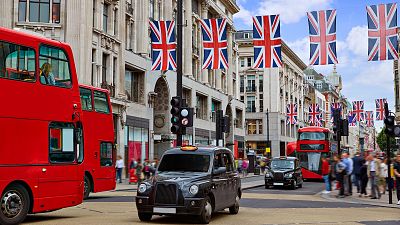 Last week it was announced that Edinburgh’s famous George Street is going to be pedestrianised.

The Scottish capital is part way through a 10-year, multimillion euro plan to transform the city centre. Multiple roads in the old town are going car-free and plans for the iconic George Street have already been unveiled.

Edinburgh is far from the only city in Europe considering a car-free future. Last May, Paris Mayor Anne Hidalgo announced similar plans to reduce air pollution post-pandemic, including transforming the Champs-Élysées into an ‘extraordinary garden.’

We know that fewer cars on our streets and in our cities is better for human and planetary health. A renewed emphasis on walking, cycling and public transport is also going to be crucial for Europe to meet long-term sustainability goals, according to the European Environment Agency.

With all this in mind, we asked our 30,000 Instagram followers where they would most like to see pedestrianised - and the results were interesting, to say the least.

Here are some of your suggestions - but by no means an exhaustive list:

This was probably our most popular suggestion by a long way. A lot of you (our team included) would love to see one of London’s most iconic streets car-free.

The reason this was such a popular suggestion is likely down to the sheer number of times this idea has been proposed, approved, and then subsequently and disappointingly cancelled.

Research has found that pedestrianising Oxford Street would drop air pollution levels in London significantly, “reducing the health risks that come with poor air quality and account for 9,500 premature deaths in the city.”

In 2018, Westminster City Council said that the plans for the road to be car-free by 2020 had been “taken off the table for good”. It led to a significant clash between London Mayor Sadiq Khan and the council responsible for the project.

If you haven’t been to Oxford Street, particularly at rush hour on a summer’s day pre-pandemic, it’s a unique experience. The narrow pavements and heavy, standstill traffic can make it an overwhelming place to be.

We can understand why people might want to see the world-famous shopping road pedestrianised, not least to provide more space between people during the pandemic.

Though it doesn’t look likely to happen any time soon, we can still dream.

As the UK’s second city (sorry Birmingham), Manchester wasn’t a surprising suggestion either. The main street of Deansgate was pedestrianised temporarily last year to allow for social distancing, and there was hope that it would stay that way for good.

But after a local bus company threatened to sue the council, the road has been partially reopened to traffic. Despite this, councillors are calling for 25 roads in the city centre to be permanently car-free.

One of the main things residents are also hoping for is improved bike access in and around the metropolitan hub. Around €18.5 million has been set aside to develop cycling in Greater Manchester, which could help with its car-free future.

The Greek capital was another popular choice from our audience. If we’re thinking about places which are too old to be designed around car use, there are few European cities as ancient as this.

Like a lot of Europe, it’s a very walkable city with good public transport too. From trams to buses to the metro, there are a lot of ways to move around Athens that don’t involve a car. It may come as a surprise then that the city has such a problem with traffic and congestion, but this is largely down to the lack of options for commuters living outside the urban centre.

Athens frequently appears in surveys listing the worst places to drive, coming 11th in the most recent Driving Cities Index from Mister Auto. This makes it the second worst European city to drive in after Moscow, Russia.

Last year plans were announced to pedestrianise a stretch of the city, calling it ‘The Great Walk of Athens’. The route stretches from the old Panathenaic Stadium, past the Acropolis, finishing at the ancient cemetery of Kerameikos. The plans have been thrown around for almost 40 years, but last year things finally looked set to happen for real.

Despite an optimistic start though, its future now seems to be uncertain, with Bloomberg reporting that “something has gone terribly wrong with the Great Walk [...] and car traffic in the city’s downtown is somehow even worse.”

What happens next remains to be seen, but our audience would certainly love a car-free Athens.

It’s Portugal’s second-largest city and one of Europe’s oldest too - so it’s no wonder that so many of you suggested Porto.

As many of us who’ve visited older towns and cities in Europe, our most historic roads are rarely designed for an influx of heavy traffic. Porto is no exception.

The city is responding to this, however. In the past, according to CIVITAS (an EU-funded initiative to create cleaner, better transport in cities) transport policy was focused on widening roads. Now the focus is on better public transport and creating safe routes for pedestrians and cyclists.

Last year for a day in June, residents were able to enjoy urban car-free zones, as 16 streets in the Downtown and Historic Centre of the city were pedestrianised.

A number of you were also keen to highlight Lisbon as a city in need of more car-free roads. A few followers specifically suggested Avenida da Liberdade (Liberty Avenue), one of Lisbon’s most famous boulevards, known for luxury shopping.

Extraordinarily, the road has 10 lanes of traffic, but is divided in multiple places by parks, mosaic pavements, and strips of monuments. As far as non-pedestrianised spaces go, it does a good job of looking fairly green - but it seems a lot of our followers would prefer it to go fully car-free.

Italy came up a lot in our mentions. Florence, Rome, Naples were all given as suggestions multiple times - but no European city ranked as highly as Milan in our (not-so) scientific research.

A world capital in fashion and luxury, Milan is a major hub of culture and perhaps unsurprisingly the wealthiest non-capital city in the EU. Though the city is well-populated, the urban area is disproportionately large, with Greater Milan home to 8.2 million people - the largest metropolitan area in Italy and third-largest in the EU.

As we’ve already seen, cities with sprawling urban surroundings are often left with major congestion problems and Milan is no exception. In 2016 it was found that Milanese drivers spend an average of 52 hours a year (almost seven working days) stuck in traffic jams. This number grew to an incredible 98 hours a year in the most recent study by Inrix.

But COVID-19 has brought some surprising developments for the northern Italian city. Congestion has fallen by 30 to 75 per cent since nationwide lockdowns were introduced a year ago, and air pollution has decreased at a similar rate.

As a result, Milanese officials decided to make 35 kilometres of streets car-free in a bid to expand cycling and walking across the city. While this is officially only temporary, it has boosted the appetite for thorough, long-term change in the city.

We had a fair few suggestions from the US, but Los Angeles was by far the most popular. It’s perhaps not too much of a surprise that places like LA were high on the list. Unlike many major cities in Europe, urban areas in the US have been specifically built and designed for car use.

Hollywood Boulevard, along with its parallel companion Sunset Boulevard, were among the more specific requests we had too. Both are fairly iconic streets, with the former well-known for its literal star-studded sidewalks as the home to the Hollywood Walk of Fame. Despite being major tourist destinations, both roads have at least five lanes of traffic at their busiest.

Rodeo Drive, one of the major luxury shopping roads in Beverly Hills, has been described as “a traffic-plagued hell on earth” by the Guardian’s Amelia Hill, and we can see where she’s coming from. Pedestrianising Rodeo Drive would be the LA equivalent of making Oxford Street and the Champs-Élysées car-free - both suggestions which either have been or currently are in the works.

Los Angeles has the worst ozone pollution and some of the worst air quality in all of the US. This is through a combination of human-caused pollution from industry, car use, and commercial vehicles, and geographical factors, like low rainfall and frequent sunshine which exacerbate the problem.

Given that the bulk of the city’s growth happened in the 1950s and 60s, when the auto industry was simultaneously booming, it’s unlikely that LA is ever going to be as pedestrianised as people may want. But the growth of electric scooter rentals, particularly in downtown LA, is helping make the city firmly car-optional - if not ever car-free.

New York was another city we weren’t surprised to hear about. Not least because, much like with Oxford Street in London, the possibility of being more pedestrianised has been teased and debated so endlessly.

As of June last year, New York had an impressive 108 kilometres of car-free roads as part of its Open Streets program. This was brought in to help facilitate social distancing and outdoor dining in the wake of the COVID-19 pandemic which hit the city hard.

Now that residents have had a taste of car-free Manhattan, they’re keen for more.

“You’re reimagining your city’s open spaces in a way that it feels like it belongs to people on foot and on bikes,” Brooklyn councillor Brad Lander told the New York Times last year. “It feels, in my opinion, like a crusade for a more sustainable city.”

Accessibility needs to be considered

It’s worth highlighting here that some of our audience also contacted us to make an important point about accessibility. While car-free streets are great for pedestrians, as well as human and planetary health, if poorly implemented it can leave some people unable to move through a city - particularly disabled people or those with mobility issues.

“There need to be alternatives to keep the centres open for everyone,” says one of our readers. “There are many people who can't walk longer distances because of health issues.”

Another follower adds, “while I want to see as many places as possible without cars, it’s worth remembering that public transport isn’t often accessible. As a wheelchair user I can’t use most of London’s underground stops, and the bus system is slow and often equally hard to use.”

So while car-free streets are increasingly popular, it’s essential that they are implemented alongside truly accessible public transport where everyone’s ability to navigate a city is considered.