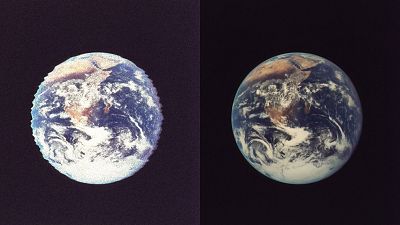 The complex simulation of our planet's system will help policymakers and scientists to prepare for the future.   -   Copyright  Unsplash
By Rosie Frost  •  Updated: 02/03/2021

This “digital twin” will be a virtual representation of as many processes on the planet’s surface as possible including human impact on water, food and energy systems.

In the past, climate and weather predictions have either focused on local regions or larger global systems. The new project, known as Destination Earth, will bring all of this information together alongside human actions to “depict the complex processes of the entire Earth system”.

With our weather becoming more severe, there is a growing need to estimate the impacts of the climate crisis. Almost half a million people have died in natural disasters linked to extreme weather in the last two decades, according to Germanwatch. A UN report recently found that the number of climate-related incidents has dramatically increased since the 1980s.

Almost half a million people have died in natural disasters linked to extreme weather in the last two decades.

The project hopes to provide a method of testing scenarios that would help policymakers and scientists to prepare for the future. Hypothetical scenarios such as building wind farms across Europe and information on where to plant crops as our climate changes could be provided by the model.

“If you are planning a two-​metre high dike in The Netherlands, for example, I can run through the data in my digital twin and check whether the dike will in all likelihood still protect against expected extreme events in 2050,” says Peter Bauer, co-initiator of Project Destination Earth.

How will a ‘digital twin’ help Europe reach its climate targets?

Destination Earth is a joint project between the number of European scientific organisations and experts in computing at ETH Zurich, a public research university in Switzerland.

The European Union is making a big investment in green technology as part of the bloc’s plan to become the first climate neutral continent by 2050. The EU hopes this project will enable more sustainable development and support environmental policies in the coming years.

By 2025, the team aims to have up to five digital twins up and running.

In a recent study, researchers estimated that they would need a supercomputer with 20,000 graphics processors consuming around 20MW of power to create the highly complex model.

“For both economic and ecological reasons, such a computer should be operated at a location where CO2-​neutral generated electricity is available in sufficient quantities,” says a press release from ETH Zurich.

By 2025, the team aims to have up to five digital twins up and running. The data from these simulations will then be combined to create “a full digital twin of Earth”.

Where are the world's tallest trees and why are they so important?