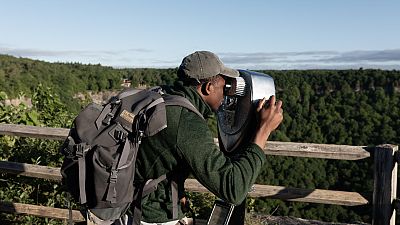 A programme in the UK is looking to offer 118 young people from ethnic minority backgrounds jobs in the environmental sector.

Leading environmental organisations are taking part in the initiative including Friends of the Earth, the RSPB, the Born Free Foundation and the Marine Conservation Society.

In total 35 charities and organisations will be offering 6-month placements for unemployed 16-24 year olds from predominantly Black, Asian and Minority Ethnic backgrounds. The positions will be offered to people currently receiving Universal Credit, a UK benefits payment for people out of work.

Only 3.1 per cent of people who work in environmental jobs identify as being from a minority background, according to research by Policy Exchange. It was found to be the second least diverse workforce in the UK, behind farming.

“The UK environmental sector’s failure to recognise climate justice and anti-racism as inextricably linked is, in part, reflective of the exclusion of Black and brown folks from these spaces,” says Larissa Kennedy, President of Students Organising for Sustainability (SOS-UK).

“Through this scheme, we can strengthen the sector and help support the mighty effort that will be needed in the months and years ahead, in the fight for climate justice.”

The campaign, Race for Nature’s Recovery, wants 50 per cent of the placements to turn into full-time roles. Already on offer are jobs in conservation, fundraising, social media, research, marketing and administration.

As well as receiving a living wage, the young people will be offered 25 hours of training and career support.

“At a time of record youth unemployment, we’re delighted that this initiative will enable talented people from diverse backgrounds to access high-quality jobs that will transform the sector and make a tangible difference for them and the natural world,” says Laura Kravac, Head of Programmes at Action for Conservation.

Is this new scheme enough?

The initiative has been celebrated by many who feel that not enough has been done to diversify the environmental sector so far.

"I am very pleased to see so many organisations coming together to start some change within the industry that is lacking in terms of diversity," says Francisca Rockey, founder of Black Geographers, to Euronews Living.

However Rockey cautions that the campaign is only sufficient if it is working with existing colleagues from ethnic minority backgrounds and addressing existing problems within the sector.

"My only concern with the creation of these initiatives is whether or not it’s being led by a diverse group of people within these organisations," explains Rockey.

She adds that it's important that "diverse colleagues have been consulted and involved in the creation of the scheme, and that they work on tackling the issues that currently exist within the green and environment the sector, particularly retention of people from Black, Asian and minority ethnic backgrounds."