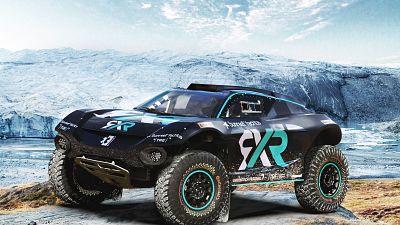 Greenland probably isn’t the first location that comes to mind when you think about motor racing.

Places like Monaco, Abu Dhabi, Silverstone may seem like a more natural fit - which is why it was big news when the team at Extreme E announced that their inaugural season would feature a race on the world’s biggest island.

Perhaps unsurprisingly, this August’s competition will be the first motorsport series to ever take place in the country. It’s set to be the third location in this year’s Extreme E season, after events in Saudi Arabia and Senegal, with races in Brazil and Argentina following to close out the series.

The uniqueness of the racing locations is entirely by design though. The race venues are chosen because of their vulnerability to climate change, as Extreme E’s specific goal is to raise awareness of environmental issues.

What is Extreme E?

Extreme E, a new off-road racing series, has been created by the founder of Formula E (Formula One’s electric counterpart). F1 legends like Nico Rosberg and Sir Lewis Hamilton have already jumped on board to create their own teams, and rising stars of the driving world like 22-year-old Jamie Chadwick are also set to compete.

It’s created a lot of buzz in the sporting world, particularly because of its commitment to gender equality (every team must have a male and female driver) and its eco-credentials.

Though motor racing may seem an unusual tool to further the environmental movement, Extreme E is hoping to build on the game-changing work already carried out by Formula E. The SUVs used (Spark ODYSSEY 21s) are all-electric, and the events themselves are intended to be carbon neutral.

The teams taking part will have their emissions monitored throughout the season, with incentives (financial and sporting) considered for teams with the lowest overall outputs.

The track designers have their work cut out for them too. Their role is to design a course with enough exciting elements to make it a worthwhile race, while ensuring there are no environmentally or socially negative impacts.

“I am incredibly excited to be bringing Extreme E’s unique electric racing format to the front line of the global climate emergency here in Greenland,” says Extreme E founder Alejandro Agag. “I promised Extreme E would break the mould in motorsport and this really proves I meant it.”

How is Greenland affected by climate change?

Because of its northerly location, Greenland is one of the regions most vulnerable to global warming. The Arctic is warming at twice the global average, meaning ice caps are melting, sea levels are rising, and the region’s fragile ecosystem is at risk. Research last year found that the Greenland ice sheet, which is rapidly deteriorating, will be “the single largest contributor to rising sea levels.”

According to NASA, Arctic sea ice is disappearing by an average of 12.8 per cent each decade since 1980. Some experts believe that by the end of this century there won’t be any summer sea ice in the North Pole.

The polar region is essential in limiting global warming. The ice effectively acts as an enormous reflector, bouncing back the sun’s rays, and thereby regulating the planet’s temperature.

The damage being caused to the Arctic won’t be immediately felt by much of the world’s population; we’ll feel the effects over the next few decades.

But for the four million people who already call the Arctic home, this environmental harm is already affecting their way of life.

A third of Greenland is situated in the Arctic, with a population of just over 56,000. More than three-quarters of the country’s inhabitants are from Indigenous communities, many of whom rely on fishing and hunting for their way of life. The loss of sea ice is shifting the ecology of the region, meaning livestock and fish populations are being heavily impacted.

The sea level rises are also affecting the most heavily populated parts of Greenland, primarily situated along the coastline.

What will Extreme E’s legacy be?

After racing in Kangerlussuaq, a small town on the western coast, Extreme E plans to join forces with international NGO Unicef to focus on projects benefiting young people in the country.

“Our younger generations are crucial in the fight for the future,” says Agag. “We are looking forward to the opportunity to build a legacy of climate education in Kangerlussuaq and throughout Greenland.”

Unicef has been working in the country for over a decade, focusing on supporting children’s rights and establishing children’s councils to amplify their voices.

“Building on the existing work of Unicef in Greenland to promote and protect the rights of children—including those linked to the environment—we will help to empower children to become active citizens, providing them with the necessary tools to reimagine a cleaner, greener future,” explains Sue Adams, Unicef UK’s director of partnerships.

Extreme E will also be facilitating further climate research in the region too, through its independent scientific committee, made up of leading climate experts from the universities of Oxford and Cambridge.

Professor Peter Wadhams, from the University of Cambridge, is one of the authorities who will be joining the work being done in Greenland. Wadhams joined the team when they initially visited the race site for a recce.

“On 1 August (2019), which was one of the days that I was in Greenland with the race team, the ice cap lost 12.5 billion tonnes of ice, a new daily record loss,” Wadhams explains. “If you consider what that level of daily loss does to global sea levels, it’s very scary indeed. It really is a crisis – this is happening now, today, and we need to act fast to have any chance of slowing it down.

“As soon as I heard the idea for Extreme E, I was very excited,” he adds. “Transport is responsible for 30 per cent of the use of fossil fuels, which are the main cause of global warming, so Extreme E’s overall principle of encouraging electric vehicle use, is very important to our planet’s future.”

Scientists have accidentally discovered a new island in the Arctic