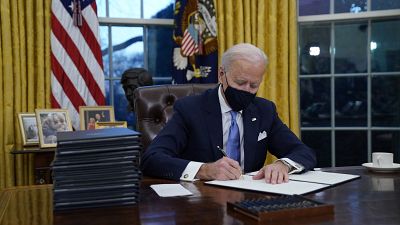 President Biden has signed an executive order to begin the process for the US to rejoin the Paris Agreement. It will take 30 days for it to be formally in effect.

The worldwide agreement, which was negotiated while Biden was Vice President, requires countries to create emissions targets aimed at keeping global warming under 2 degrees celsius.

The US was officially the first to leave the international climate accord on the 4th of November, the day after the election took place. A memo seen by the American media on Saturday reaffirmed Biden’s election promise to reverse the Trump administration’s decision and rejoin the international pact to cut carbon emissions on day one.

“We face four overlapping and compounding crises: the COVID-19 crisis, the resulting economic crisis, the climate crisis and a racial equity crisis. All of these crises demand urgent action,” reads the memo sent by Ron Klain, Biden’s chief of staff.

“On Inauguration Day, President-elect Biden will sign roughly a dozen actions to combat the four crises.”

It was the third of 17 executive orders the new president signed last night after the inauguration.

Among the other orders signed by Biden last night were the cancellation of the controversial Keystone XL pipeline and a review of more than 100 Trump administration environmental rollbacks.

During Biden’s first months in the White House, the US is also planning to host an international climate summit. However, his green track record isn’t spotless, according to some environmentalists, as he said he will not ban the controversial practice of fracking.

The US is one of the world’s biggest emitters of carbon dioxide and recently ranked bottom on an international scale of climate action for the second year in a row.

The Trump administration’s continued rollback of climate policy and use of the pandemic to justify relaxed environmental regulation means that the US’ actions are rated as “critically insufficient” by the Climate Action Tracker.

Until the country rejoins the Paris Agreement, it will not be able to provide an updated set of Nationally Determined Contributions (NDCs). These are a list of proposed efforts each country puts forward to outline how they plan to reduce national emissions and adapt to the impacts of climate change.

It isn’t just about the US as an individual country either. Analysts believe that the country’s exit from the Paris Agreement has weakened international efforts to curb emissions. A refusal to contribute to climate aid may have also made it more difficult for developing nations to mitigate the effects of climate change.

Experts hope that strong leadership from the Biden administration will provide the reassurance other countries need to take bold action. Chinese Foreign Ministry spokesperson, Hua Chunying, said that China would embrace the expected return of the US to the climate agreement.

“China welcomes and looks forward to the return of the new U.S. administration to the Paris Agreement and its positive contribution to global climate governance,” Hua said in a statement.

On the first day of his mandate, I address a solemn proposal to President @JoeBiden:

European leaders hailed a “new dawn in America” on Wednesday, hours before Biden is to be sworn in as President. In a speech to the European Parliament, President of the European Council Charles Michel, listed climate change as one of five priorities the two global powers would work on together.

But, with many countries failing to meet emissions targets necessary to limit global warming, it remains to be seen if the country’s re-entry into the agreement will encourage much needed international cooperation on climate change.