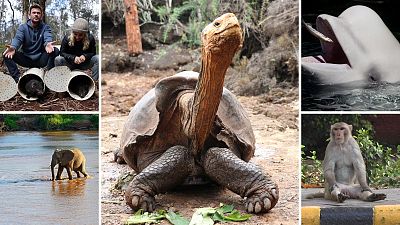 2020 was the year a huge amount of captive wild animals were set free. It was the year conservationists found new, technology-based solutions to help endangered species thrive.

To honour this achievement, we've rounded up all the promising animal news from the last 12 months, to cheer you up as we head towards the new year.

As lockdowns reshaped our day-to-day habits, so did they with wildlife. Animals were spotted in unusual places, from ahippo trotting down to his local petrol station, to deers roaming the streets of Paris and even monkeys chatting to each other on the pavements in India.

But some of the most heart-warming and inspiring stories of this year were the ones about animals being freed after decades of captivity.

The world's loneliest elephant, Kaavan, is now enjoying his days in a sanctuary in Cambodia after 35 years being kept alone in a zoo. The American singer Cher campaigned along with other animal rights activists until the elephant was released.

A two-year-long mission was completed when two beluga whales, Little White and Little Grey, were successfully relocated to a sanctuary in Iceland after spending years in a Chinese aquarium.

Diego, the 100-year-old giant Galapagos tortoise, has also been released back onto his native island. He has 'worked' tirelessly over the last 50 years on a breeding program to ensure Galapagos tortoises won't go extinct, and is said to have almost single-handedly saved his once-threatened species by having 800 children.

Technological innovation was on the rise this year too, from the development of a robot sloth who hangs on trees to spy on endangered animals to drones who save koalas from extinction.

Conservationists have many reasons to celebrate all around the world too.Tasmanian Devils made a comeback in mainland Australia with the help of actor Chris Hemsworth. On the other side of the globe, the birth of a rare rhino calf at the UK's Chester Zoo gave hope for the future species.

Click on the video above to learn more about why 2020 was not that bad after all for wildlife.