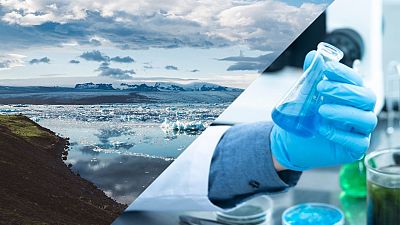 It's a great time to become a 'citizen scientist' and help to save the planet. With the coronavirus pandemic sweeping the world, many people in Europe are spending more time looking at computer and tablet screens indoors, or playing more attention to the natural world around them, outside their homes.

Scientists are hoping to tap into this resource with projects that just about anyone with an internet-connected device and some time can participate in.

By deciphering ancient documents, observing changes in nature, or offering your computing power for future global warming scenarios, you too can help some ground-breaking scientific research.

Euronews gathered a panel of experts to discuss some of the 'citizen science' projects underway around Europe.

Here are five different projects where you can help out:

Firstly, meet one of the unsung heroes of the field. After the 1864 war that saw Denmark defeated by the German state of Prussia, Danish general Haagen Waldemar von Mathisen was left with nothing to do, so he became a very early citizen scientist.

His greatest passion was to track down the log books from ships posted by the Danish kind to collect tariffs in the Øresund Strait, the narrow stretch of water that separates modern day Denmark and Sweden. He would then, very neatly, copy out the weather records the captains had observed.

"It turned out he had more than 30,000 observations where he had registered the name of the ships and [their] position, and the date and the temperature,” says Adam Jon Kronegh from the Danish National Archives, who recently discovered the treasure trove of climate data.

The ship logs he copied also included vessels that had been ferrying to and from Greenland. “He recorded various natural phenomena, such as icebergs and winds, and special seaweed deposits,” recounts Kronegh. As for the records themselves, they're not always in perfect condition. “We had to vacuum clean the papers for fungus,” he reveals.

Working on the archives and exploring their potential for climate science is Martin Stendel from the Danish Meteorological Institute, who is calling his new citizen science and data rescue project 'Ropewalk'.

General von Mathisen was not the first one to keep records: the Danish archives hold thousands of records of Danish, European and American ships dating back to the 18th century.

In the coming months, the Danish archives plans to put the entire scanned records online — and to ask the public to help digitise them by reading the record-keepers’ handwriting.

The use of the data? To help meteorologists build a comprehensive picture of the weather in this part of northern Europe and better understand what drives long-term climate patterns.

A similar project has emerged from the former Belgian colony around the Congo River, where individuals working in government institutes, meteorologists and even missionary work created pages upon pages of information — much of it about weather patterns.

“And all that data was gathered up in Brussels and stayed in the archives and nothing has been done with it,” says Koen Hufkens, an ecologist.

“So we're left with this tremendous amount of information which had its use in the past, but since then has not been touched.”

Hufkens runs the Jungle Rhythms and JungleWeather projects, which are using the data to see how the Congolese jungle is reacting to climate and nature.

“A couple of years back I got some funding to digitise most of the archives, and there's now a record of 75,000 scans such as the one shown here,” he says.

The records include “little gems” — like drawings of an eclipse in 1933 — among an archive of 50 million values.

Hufkens is looking for volunteers to help transcribe the scanned documents on the Jungle Weather website.

The data is helpful for tracing climate patterns, as scientists will be able to use the records from the early 20th Century as a kind of 'baseline' against which they can compare the growth and flowering of trees in the Congo basin in the 2020s.

3) Track how humans have changed the Mediterranean Sea

Citizen science can also mean getting in the great outdoors, and into the oceans.

Our guest on that topic is Joaquim Garrabou, who has a story about a scary kind of fish that is thriving in the Med because of climate change.

The researcher from Spain's Institute of Marine Sciences says a species of fish called the silver-cheeked toadfish, which is native to the Indian Ocean, has found its way as far up as the Mediterranean — and it's causing havoc.

"This species is originally from the Red Sea and entered through the Suez Canal into the Mediterranean," he says.

It happened not so long ago, he adds: "The most reliable information that we have is that it entered in 2003, so it's less than 20 years."

"If it bites you, you would have nasty injuries, but besides this if you fish it and you eat it, it has a powerful toxin, which is really serious and can cause death."

Garrabou says the risk now is that it could spread into the Atlantic Ocean or beyond, and his Observadores del Mar project is the perfect vehicle to track the spread of such species.

He wants to deploy people's observation skills to follow unusual species and other factors in the waters. The 15 projects his institute is running is open to recreational divers, kayak users or even people sitting on the beach.

4) Project the climate of the future

For the less outdoorsy person who still wants to help cutting edge scientific research from the comfort of their own home, Sarah Sparrow has the answer.

Her project ClimatePrediction.net aims to deploy the power of thousands of home computers to simulate future climate scenarios.

"We use idle time on people's home computers so that we can run weather and climate model simulations," she says.

"We look at all different types of extreme weather around the world and the reason that we need citizen scientists in order to do this is so we can get very, very large numbers of simulations, because we're trying to look at the rare extreme events that are happening: the floods and the heatwaves, wildfires, and these sorts of things."

Sparrow says it will help scientists understand how climate change is affecting the occurrence of such extreme events.

The project involves downloading a piece of software on your computer and letting it run — it can be as simple as that.

5) Get out in nature in France

In the francophone world the Vigie-Nature project is a standout citizen science initiative, which observes how birds, bats, insects, snakes and butterflies across France are reacting to changes on our planet

Grégoire Loïs, the deputy director of the project, has created a standardised system where people can take part in activities including soil sampling

"It's quite hard to get an estimate of the abundance of taxa/flora, [so] what we do is that we ask them to do replicates in a 5x2 metre rectangle," he says.

The site the volunteers are sent to is randomly chosen, and the work can be quite demanding, although he has found that citizen scientists rarely shy away from difficult and complex tasks.

By combining the results with other observational data, such as the movements of bats and birds, Loïs says they can see how local plants and animals have been severely affected by climate change.

One programme involves skilled volunteers taking part in bird and butterfly-watching. They have put in more than 1.5 million hours into their observations.

One example of a climate change effect they have observed comes from Scandinavia. "It has been shown 20 years ago with the pied flycatcher [bird] in Sweden that it did come back from Africa, but that the caterpillars used to feed their chicks came one week earlier. And this did cause some decrease in the pied flycatcher population in Sweden," Loïs says.

More discoveries like these are can only be fuelled by citizen volunteers, who provide a wealth of data that would simply be unreachable by hired researchers, he adds.

The internet's connectivity means that information gathered in the past or the present day can have uses far beyond that for which it was intended, says Swiss climatologist Stefan Brönnimann, a keen leader in project to rescue historic weather data.

By using digital techniques to weave the patchwork of information available around the world, he says, scientists could answer some vast questions: “Why some periods in the past were flood-rich, [or] why there were long-lasting droughts, for instance.”

Brönnimann continues: “We're interested also in the mechanisms of the whole machinery of the climate system — how do monsoons [in the tropics] relate to the climate of Europe, for instance? For that we need long records.”

The work underway to recover data from the past, some of it by professionals, and some by citizen scientists, is now being collated together by the Coperncius Climate Change Service.

It has been supporting the collection of such historical data through its collaboration with the National Oceanic and Atmospheric Administration’s National Centers for Environmental Information, and now has a new web-based data upload facility that is designed to simplify contributions.

Even small amounts of historical data can make a big difference; filling in a gap in the records often opens up whole new avenues to explore. The longest observational records are for variables such as temperature, precipitation, wind and pressure, which can stretch back over 150 years.

The panelists took part in a Euronews Climate Now live event on Thursday 17 December, which can be watched again from the player at the top of this page.