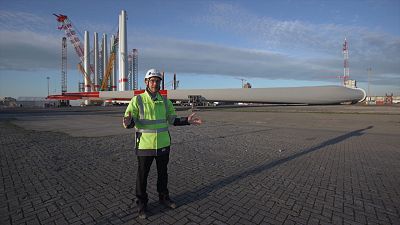 The increase in power comes with an increase in rotor diameter, with longer and more aerodynamic blades, as well as constant improvements in power generation, hardware, and software.

Industrial leaders like Siemens Gamesa and GE already revealed 12-megawatt and even 14-megawatt models with rotor diameters over 220 meters.

Euronews visited the heavy weight terminal at the port of Ostende, in Belgium, used by Siemens Gamesa to install 58 of its 8.4-megawatt turbines at the SeaMade offshore wind farm nearby.

"These blades have the length of 81.4 metres. Largest width is about 5.4 metres.

"We need more and more green energy. So the bigger they are, the more surface they take, the more energy we can produce.

"Power is one thing where turbines are getting better all the time, and then in the turbine itself, there's a lot of technology, a lot of investment in research to get them better and better - meaning that there are less components. Less components is less maintenance, it's also less things that can break down.

"The future, I think, looks bright for wind power. There's a lot of demand worldwide. Today, Siemens Gamesa only - our company only - we have more than 50 gigawatt of turbines worldwide installed. And the demand is still growing. Green energy is the future for our children and grandchildren."