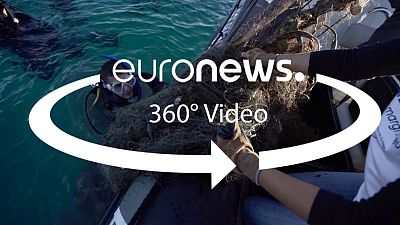 As part of our Green Tomorrow initiative, Euronews is helping to build awareness of the scourge of plastic waste.

Every year, millions of tonnes of litter end up in our oceans, posing huge environmental, economic and health concerns.

The most abundant and problematic kind of marine litter is plastic.

Breaking down at sea, plastic waste turns into microplastics that find their way into the human food chain.

Lost or abandoned fishing equipment represents 27% of all marine litter in Europe.

Old fishing nets are a potential trap for marine animals - and a source of chemical contamination, disruptive and toxic for many species.

It's estimated that well in excess of 150 million tonnes of plastics have accumulated in the world's oceans; approximately eight million tonnes are added every year.

In the European Union, plastics represent more than 80% of litter found on beaches. Half of that is single-use items.

The most commonly-recovered items in beach cleanups are cigarette butts. They give off high levels of toxins and their non-biodegradable filters turn into microplastics.

The European Union and other international organisations consider marine litter a worldwide concern.

In response, the EU has banned single-used plastic products that have sustainable alternatives.

It’s also adopted a strategy for plastics that changes the way plastic products are designed, used, produced and recycled based on a circular economy approach.