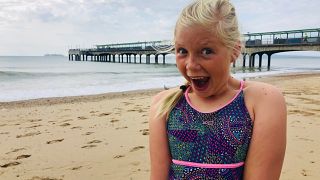 Ruby Yelling is an 11-year-old with sporting achievements in her genes. The daughter of Liz and Martin Yelling, a double Olympian and running expert respectively, Ruby set out to achieve a feat of her own.

Mum, Liz Yelling is the former training partner of Paula Radcliffe and an Olympian and Commonwealth medalist. She coaches experienced marathoners to help them “achieve more than they’d previously thought possible,” it states on her website.

Ruby swam a total of 2600m along the English Channel, pier to pier. Beginning at Boscombe pier and ending up at Bournemouth pier, it was the furthest she had ever swam without a wetsuit. The impressive journey was all to raise money for the World Wide Fund for Nature (WWF)’s endangered species fund.

“My favourite endangered species are: snow leopard and dugong (which is a bit like a walrus/sea lion)!” says Ruby. “Because there are not many of them left, now we need to make a change because otherwise more species will be added to this list and it will get bigger and bigger unless we change our ways.

“Small things added together can make a bigger impact,” she adds.

Ruby is also pledging to stop buying food and products which contain palm oil, in an attempt to protect the world's precious forests, and she’s chosen an important charity to raise money for.

WWF is at the heart of global efforts to address the world’s environmental challenges, safeguarding the natural world, tackling climate change and enabling people to only use their fair share of natural resources.

So far, Ruby has raised over £1,700 (€1,856) on her JustGiving page. Updating her contributors on her progress, she writes: “I did it!! It was further than it looked but I swam 2600m in the end and my legs felt like jelly when I got out of the water and my tongue went numb from the salt water. I really enjoyed it and I am so pleased that I have managed to raise so much money for the WWF.”

Dad, Martin Yelling spoke to Euronews Living about how Ruby came to him and proposed the ambitious swim herself.

"Ruby is passionate about the environment, our oceans, wildlife and conservation of the animals that we share the planet with," he explains

"2020 has been a difficult year, especially for children. Ruby has suffered a few setbacks and disappointments and wanted to do something positive to help a cause she cares about."