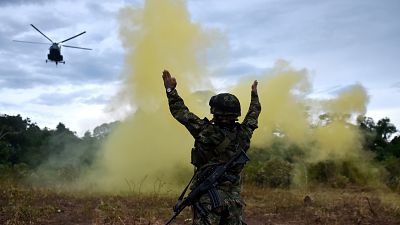 A soldier in Colombia working to catch those responsible for illegal deforestation.   -   Copyright  RAUL ARBOLEDA/AFP
By Marthe de Ferrer  •  Updated: 04/09/2020

The latest environmental news around the world in pictures.

A burned residence in Vacaville, California after historic wildfires hit the state. Potentially dangerous lightning storms have proved to be slightly milder than expected, and temperates have eased - possibly saving the state from far worse damage.

The Cerro Lagoon in Limpio, Paraguay has turned pink and reportedly smells foul after untreated waste was allegedly dumped by the Waltrading S.A. tannery company.

The Miami Herald re-released photos of the late environmental writer Juanita Greene, who was a conservation pioneer. Greene helped Biscayne Bay in Florida become a national park, when it was threatened by developers. Environmentalists are hoping to revive interest in the area, as the fragile marine environment, particularly in the north of the bay, is suffering.

Colombian soldiers are carrying out the sixth phase of the Artemisa Campaign to combat deforestation in the Amazonian regions of the country. In this photo a soldier is directing a helicopter to the landing area in Vista Hermosa at the Natural National Park in La Macarena, Meta Department. Eight people suspected of illegally clearing the forest were arrested this week.

Fires have devastated land recently deforested by cattle farmers near Novo Progresso, Brazil. Experts fear that at the current rate, the Amazon could reach a tipping point in the next 15-30 years, by which point it would be unable to generate enough rainfall to sustain itself.

Floods have hit Tuti Island in Sudan, where the Blue and White Nile merge. Tuti sits between the twin cities of Khartoum, the capital, and Omdurman. The Nile has reached its highest point (17.43m) since records began, leaving people struggling to build dams against the rising waters. Seasonal floods in Sudan have killed 94 people so far, and damaged over 60,000 homes according to experts.

Italian marine biologist Monica Blasi swims off the coast of Filicudi, in the Sicilian Aeolian islands archipelago, Italy. The Aeolian Archipelago is a particularly crucial area for marine biodiversity, home to bottlenose dolphins, striped dolphins, sperm whales, and sea turtles. The tourism and construction work in the area has had repercussions for the natural habitats in the water, so campaigners and conservationists hope to establish a protected marine area around the islands.

Extinction Rebellion have begun a series of global rebellions, beginning with action in Manchester, Cardiff, and London. Across Europe and the rest of the world the movement is picking up again as lockdown measures are lifted, with hundreds of thousands of people taking to the streets. From Poland to Australia, mass civil disobedience is taking place in the form of art installations, road blockades and speeches by famous supporters.